Mother of 3 killed in fiery crash on 118 Freeway in Porter Ranch; husband arrested for DUI 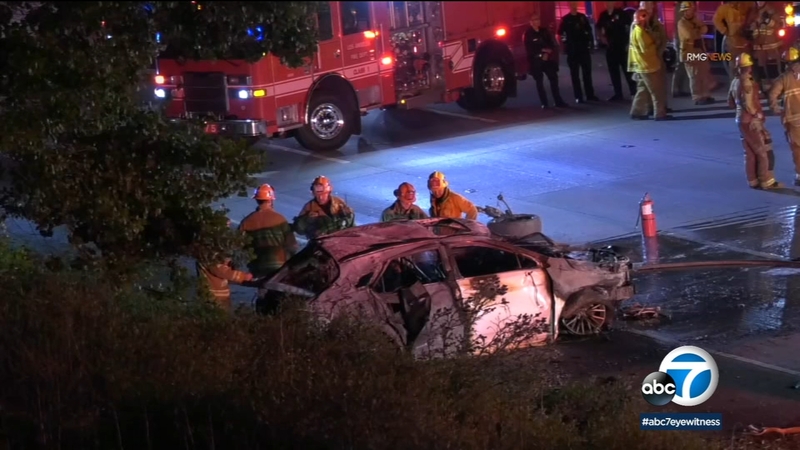 Mother of 3 killed in 118 Fwy crash in LA; husband arrested for DUI

PORTER RANCH, LOS ANGELES (KABC) -- A 31-year-old mother of three was killed in a fiery crash on the 118 Freeway in Porter Ranch overnight, and her husband was arrested on suspicion of DUI.

The crash happened around 11:42 p.m. Thursday on westbound lanes near Reseda Boulevard. The California Highway Patrol said David Cohen, 31, was driving a Lexus SUV with his wife and three children, ranging in age from 9 years old to only 4 months old, in the car.

At some point and for unknown reasons, the vehicle lost control, collided with a guardrail, traveled up a dirt embankment and hit a concrete sewer drain before it caught fire.

Cohen was able to get himself and one of the three children out of the vehicle, and two LAPD officers who witnessed the crash were able to extricate the two other children.

However, they were unable to extricate his wife, identified as Zeomara Cohen, before the car became fully engulfed in flames, authorities said. She died at the scene.

Cohen and the children were taken to Northridge Hospital as a precaution before he was booked on suspicion of DUI.

The three children were released to family members.

Several lanes of the freeway were shut down in the early morning hours Friday, but they have since reopened.

Anybody with information about the crash is encouraged to contact the CHP West Valley area office at 818-888-0980.