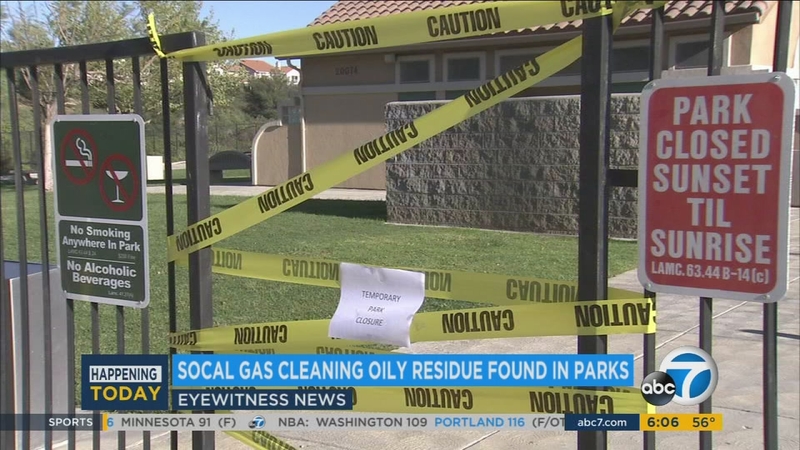 "It's on the north-facing surfaces, the surfaces that face the leak, and it's this speckled pattern," Porter Ranch resident Tom Cannon said.

Earlier this week, Los Angeles County health inspectors determined there was no evidence of oily residue at the park. But the city sent out its own experts Tuesday, who reached the opposite conclusion.

"The challenge is it's the same thing - the community continues to have to be the ones doing the testing and the requesting," said Paula Cracium, president of the Porter Ranch Neighborhood Council.

Cracium said she asked SoCalGas to clean the parks at a meeting weeks ago. Now that more relocated families are going to start moving back to their homes, she says she's grateful that it's finally being done.

"It's OK for the community to ask that the parks where their kids play, where their grandparents and families come and eat on these picnic tables, that they're thoroughly clean before they're asked to come back to the community," Cracium said.

But some say the residue has been around for months, and the fact that it's only being cleaned now is too little, too late.

"SoCalGas has not been proactive about taking care of the community. All they do is they react to the community whenever we find something out," Porter Ranch resident Daniel Guimera said.

SoCalGas says the oily residue is not toxic but are recommending that residents avoid contact because it may cause irritation of the skin.

"We advise members of the public to not clean it up themselves, and we're really recommending that they let the experts take care of that," said Angelo Bellomo, deputy director of health protection with the L.A. County Health Department.

The oily residue is apparently form a brine solution that was pumped into the leaking well last year.

The utility also says it will begin cleanup efforts this week at 140 homes where brown spots have been reported.

"The air outside has no methane, it's hard to imagine that the air inside has any methane or any odorant," Mizrahi said.