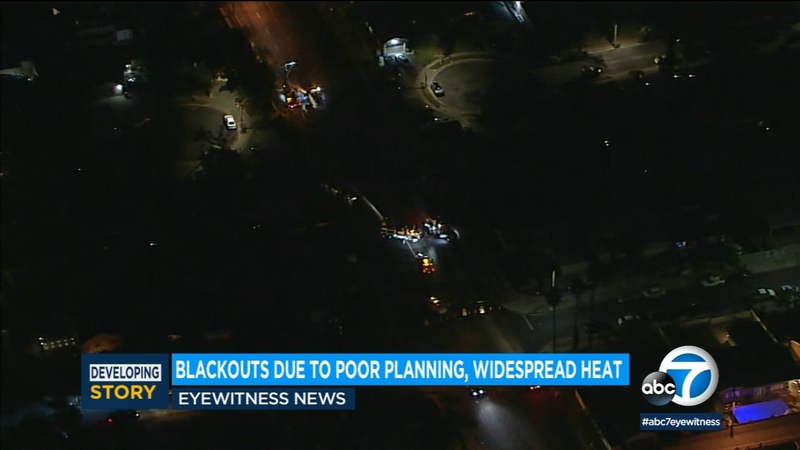 The 131-page report covered events of Aug. 14 and Aug. 15 when the state's power grid ordered utilities to cut electricity to customers on a rotating basis for around an hour at a time. More than 800,000 homes and businesses were affected over the two days. It was the first such order since 2001.

Gov. Gavin Newsom demanded an investigation. An analysis was prepared by the California Public Utilities Commission, the state Energy Commission and the California Independent System Operator, which manages the state's power grid.

The report said the outages didn't have a single root cause but there were a series of contributing factors.

California was sweltering under a "historic" heat wave, with temperatures 10 to 20 degrees above normal affecting 32 million residents and the temperature didn't cool off much overnight, meaning air conditioners continued to run, the report said.

The heat wave also blanketed other Western states and made it harder to import extra electricity to deal with the demand, the report said.

"The extreme heat wave negatively impacted conventional generation (such as thermal resources fueled by natural gas), which typically operates less efficiently during temperature extremes," the report said. "Even for solar generation, high clouds caused by a storm covering large parts of California and smoke from active fires during these events reduced ... generation on some days."

California, which has increased its reliance on solar power as it moves toward total reliance on renewable energy, also didn't properly plan for more supplies to cover evening hours when solar power production begins to fall, according to the study.

Also, availability of hydroelectric power that summer was below normal, the report said.

Some issues in the energy market also contributed to supply challenges, such as failing to schedule enough energy ahead of time, the report said.

The report said energy agencies are already taking actions to avoid similar outages during expected heat waves next summer. That includes tracking progress on electrical generating and battery storage projects being built in California to ensure there aren't any "'regulatory barriers" to prevent them from being completed on time.