NFL officials say they're behind schedule in Super Bowl preparations, but have back up plans to ensure everything is done in time.
KABC
By Ashley Mackey 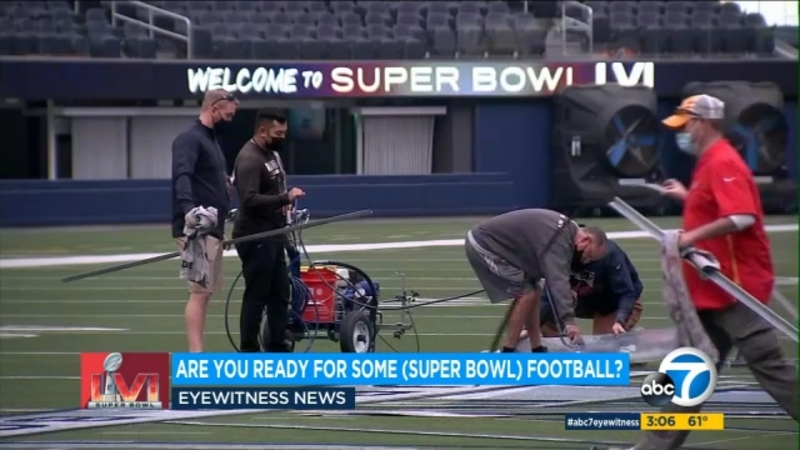 INGLEWOOD, Calif. (KABC) -- With so much that goes into preparing for a Super Bowl and less than two weeks left, crews at SoFi Stadium are working around the clock to get the grounds ready for game day.

Field crews were out painting the field early Tuesday and making sure fixtures were in place for Super Bowl LVI, but NFL officials said there's still a lot more to be done.

"We're driving for Sunday," said Ed Mangan, the Field Director for NFL. "You have to stay focused on what's going to happen on Sunday: kickoff. So, it's basically, concentrate, focus and get it done."

The NFL officially started work for the Super Bowl at SoFi Stadium Jan. 10, but because the NFC Championship game was held there just days prior, they didn't start their full build-out until Monday.

"We've been planning these contingencies since back in November and now we actually had to implement them," said Katie Keenan, the Senior Director of Live Events for the NFL. "So, just really adjusting our schedules to some longer hours than we had planned originally, but everyone's just really excited to get started and get ready for next week."

Officials also said they've run into some shipping delays, but this is an exciting time and back up plans are in place to make sure everything gets done right on time.

The preparations for the field aren't just for football. Along with the star-studded halftime show with Dr. Dre, Snoop Dogg, Mary J. Blige, Eminem and Kendrick Lamar, fans can also expect to see Jhené Aiko, Mary Mary and Mickey Guyton sing on the big stage. Guyton made history as the first Black woman to earn a Grammy nomination in a country category.