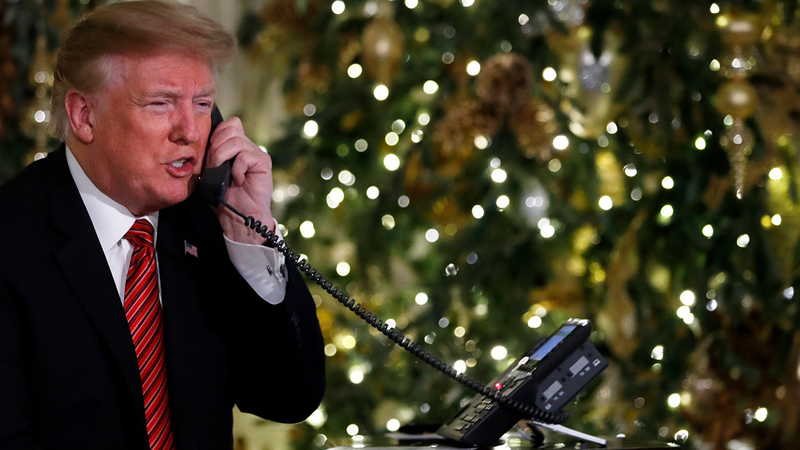 President Donald Trump and first lady Melania Trump on Christmas Eve took calls from children anxious to find out where Santa was on his gift-giving journey.

WASHINGTON -- President Donald Trump and first lady Melania Trump on Christmas Eve took calls from children anxious to find out where Santa was on his gift-giving journey.

In one conversation, Trump asked a 7-year-old named Coleman, "Are you still a believer in Santa?" He listened for a moment before adding, "Because at 7, it's marginal, right?" Trump listened again and chuckled before saying, "Well, you just enjoy yourself."

Mrs. Trump told a caller that Santa was in the Sahara. Several minutes later, she reported that Santa was far away in Morocco but would be at the caller's home on Christmas morning.

Mrs. Trump later tweeted that helping children track Santa "is becoming one of my favorite traditions!"

The NORAD Tracks Santa program became a Christmas Eve tradition after a child mistakenly called the forerunner to the North American Aerospace Defense Command in 1955 and asked to speak to Santa.

The program wasn't affected by the government shutdown. It's run by volunteers at Peterson Air Force Base in Colorado using pre-approved funding.

Trump most likely would have been attending Christmas services at a church near his estate in Palm Beach, Florida. But he scrapped plans to head to Florida for the holidays after parts of the government were forced to shut down indefinitely in a budget stalemate with Congress.
Report a correction or typo
Related topics:
politicswashington d.c.childrensanta clauschristmasu.s. & worldpresident donald trump
Copyright © 2022 by The Associated Press. All Rights Reserved.
TOP STORIES
Death toll rises to 21, mostly children, in TX school shooting
Uvalde school shooting: What we know about 19 kids, teacher killed
Watch Steve Kerr's raw, emotional plea after Texas shooting
CA water board adopts ban on watering some green spaces amid drought
Suspect wounded after CHP, deputies are fired upon in East LA
Mater Dei HS celebrates 3 Heisman Trophy winners amid controversy
More water restrictions expected this summer
Show More
Biden says 'we have to act' after Texas school shooting
What is monkeypox? CDC updates doctors as CA reports 1st possible case
11 killed in shooting attacks on 2 bars in Mexico
How to talk to kids about Texas school shooting
A look at some of the deadliest US school shootings
More TOP STORIES News