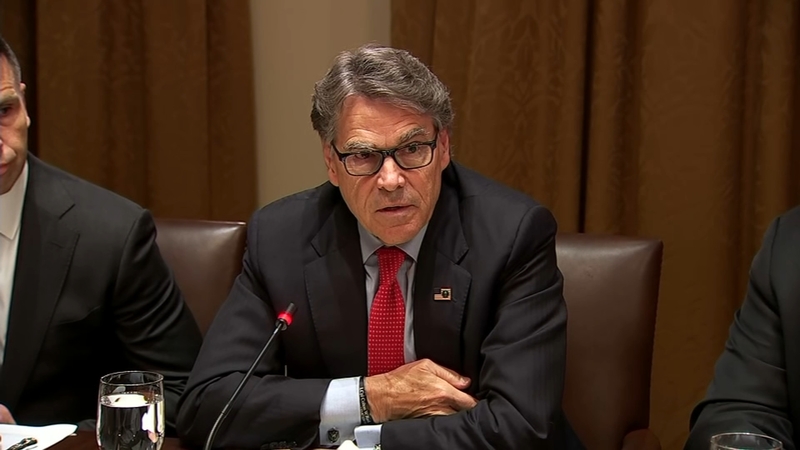 WASHINGTON -- Members of the House Select Committee investigating the Jan. 6 attack on the US Capitol believe that former Texas Governor and Trump Energy Secretary Rick Perry was the author of a text message sent to then-White House chief of staff Mark Meadows the day after the 2020 election pushing an "aggressive (sic) strategy" for three state legislatures to ignore the will of their voters and deliver their states' electors to Donald Trump, three sources familiar with the House Committee investigation told CNN.

A spokesman for Perry told CNN that the former Energy Secretary denies being the author of the text. Multiple people who know Perry confirmed to CNN that the phone number the committee has associated with that text message is Perry's number.

The cell phone number the text was sent from, obtained from a source knowledgeable about the investigation, appears in databases as being registered to James Richard Perry of Texas, the former governor's full name.

The number is also associated in a second database as registered to a Department of Energy email address associated with Perry when he was secretary. When told of these facts, the spokesman had no explanation.

The House Select Committee declined to comment on the author of the text.

The Nov. 4, 2020, text message from Perry's phone garnered a great deal of attention this week; it was included in a tranche of roughly 6,000 documents Meadows turned over to the House Select Committee.

The text was first presented publicly on the House floor Tuesday night by Rep. Jamie Raskin, a Maryland Democrat, and reads: "Here's an aggressive (sic) strategy: Why can't (sic) the states of GA, NC, PENN and other R controlled state houses declare this is BS (where conflicts and election not called that night) and just send their own electors to vote and have it go to the SCOTUS."

Raskin cited the text in the debate over holding Meadows in criminal contempt of Congress, using it as an example of evidence that needed further explanation from Meadows, which the former chief of staff is refusing to provide.

"How did this text influence the planning of Mark Meadows and Donald Trump to try to destroy the lawful electoral college majority that had been established by the people of the United States and the states for Joe Biden," Raskin asked. "Those are the kinds of questions that we have a right to ask Mark Meadows."

The text to Meadows suggests a willingness to force a constitutional crisis to undermine the election even before all the legal votes had been counted. The final results from Pennsylvania and Georgia didn't come for days; Trump ultimately won North Carolina.

Boston College professor and historian Heather Cox Richardson found the text striking in that its author "wanted Republican-dominated state legislatures not even to wait to see who had won the election-none of those states had been called by Nov. 4-but simply to ignore the will of the voters, choose their own electors, and hope that the Supreme Court would hand the election to Trump as he had been saying for weeks it would."

In his remarks, Raskin inaccurately described the text message as having come from a "House lawmaker." Sources told CNN this was an inadvertent error. After CNN reached out for comment, a Raskin source said the congressman learned of the error this week from CNN and confirmed the mistake with staff. He has written a letter to correct the Congressional Record.

Perry, the longest serving governor in the history of Texas, became the Secretary of Energy for President Trump from 2017-2019. An unsuccessful presidential candidate in 2012 and 2016, Perry in 2015 described the candidacy of then-rival Trump as "a cancer on conservatism" that "will destroy a set of principles."