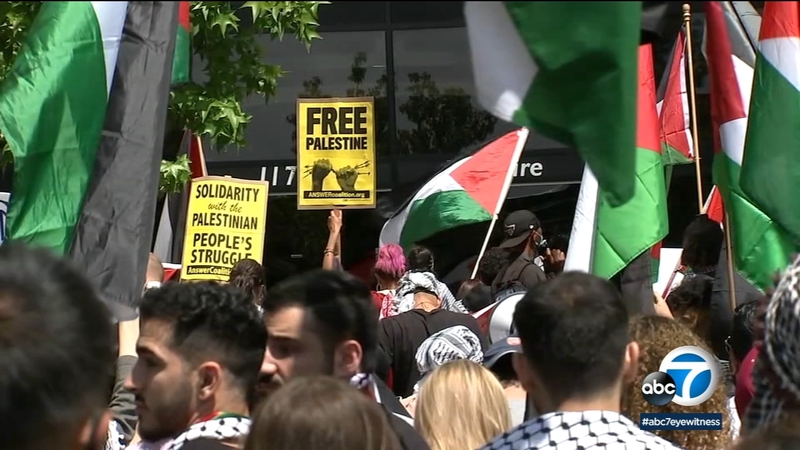 WEST LOS ANGELES (KABC) -- Hundreds of pro-Palestinian demonstrators gathered in front of the Israeli consulate in West Los Angeles Tuesday afternoon to call for an end to Israeli airstrikes in the Gaza Strip.

Waving Palestinian flags and chanting "Free, free Palestine," the protesters voiced their anger over Israel's attacks against Palestinians in Gaza.

"We're protesting to show our solidarity. To show the Zionist consulate that we're not going to back down until the U.S. stops all aid to Israel, and until every Palestinian has a right of return to their homeland," demonstrator Lulu Alshami said.

The fighting continued on Tuesday after erupting last week.

Israeli airstrikes have killed at least six people Wednesday as Biden is taking a "tougher tone" in calls with Israel, sources say.

Palestinians across Israel and the occupied territories went on strike in a rare collective protest Tuesday as Israeli missiles toppled a building in Gaza and militants in the Hamas-ruled territory fired dozens of rockets that killed two people.

At least 219 Palestinians have been killed in the current fighting, including 63 children and 36 women, with 1,530 people wounded, according to the Gaza Health Ministry, which does not break the numbers down into fighters and civilians. Hamas and Islamic Jihad say at least 20 of their fighters have been killed, while Israel says the number is at least 130.

Twelve people in Israel, including a 5-year-old boy, have been killed in rocket attacks.

U.S. President Joe Biden told Israeli Prime Minister Benjamin Netanyahu that he expects a "significant de-escalation" Wednesday on the path to a cease-fire with Hamas.