Proposition 187: Passing of anti-immigrant measure in 1994 sparked a movement in Latino community 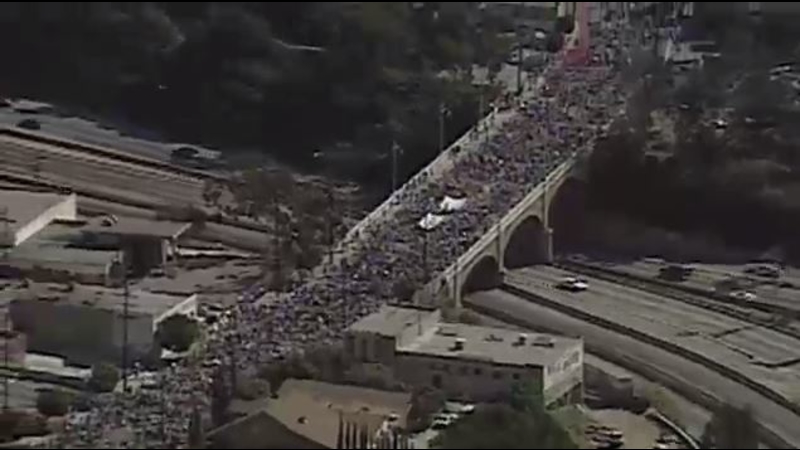 Twenty-five years ago on November 8, 1994, California voters approved Proposition 187, an anti-immigrant measure that threatened to strip undocumented immigrants of public services, like healthcare, and deny their children public education.

The measure passed with a wide margin of 59% to 41%. Its passing triggered protests that drew an estimated 70,000 immigrant-rights supporters, who marched to L.A. City Hall. It was the largest protest Los Angeles had seen at the time since the Vietnam War.

Prop. 187 was eventually blocked and deemed unconstitutional by a federal judge.

We reached out to the Coalition for Humane Immigrant Rights of Los Angeles for comment on the impact this proposition had in the Latino community:

"Immigrants are now thriving in California, contributing to our cultural and economic strength, and voting so that never again anyone dares dismiss our power," said Angelica Salas, the executive director for CHIRLA.

Many believe this day in history inspired a movement among Latinos - mobilizing future voters and politicians.

"I remember 1994, Prop 187 I was out on the streets with folks. We found our voice here in L.A.," Los Angeles Mayor Eric Garcetti said. "The face of the world we can see in the streets of L.A., and the future of this country you can see out in the streets of L.A."
Report a correction or typo
Related topics:
politicseducationlatinoprotesteric garcettihistorypoliticsthis day in historycaliforniaimmigration
Copyright © 2022 KABC Television, LLC. All rights reserved.
TOP STORIES
Kidnapped SoCal teen found in NY thanks to quick-thinking detective
FTC warns about baby formula scams on the rise amid shortage
16-year-old girl stabbed by classmate in Montclair, police say
$45,000 reward offered in case of teen killed in Inglewood shooting
Controversy surrounds Villanueva over campaign ad filmed in church
House passes terrorism bill after shooting in Buffalo, New York
More than 50 brown pelicans found injured, sick or starving in SoCal
Show More
Norwalk teacher arrested for allegedly sexually abusing 2 students
Alleged gunman sent diary to newspaper before OC church attack
What is monkeypox? What to know after US confirms 1st 2022 case
SoCal: Public warned of unlicensed COVID testing sites as cases rise
Federal agency probing Tesla crash that killed 3 in Newport Beach
More TOP STORIES News