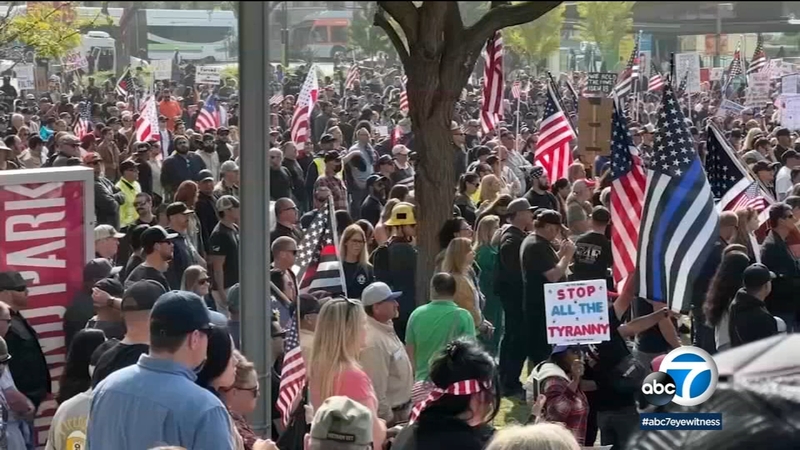 The demonstration, dubbed the March for Freedom rally, was being held on the same day that the city's proof of full COVID-19 vaccination mandate, one of the strictest in the U.S., went into effect.

Many of the protesters carried American flags and signs decrying vaccination requirements. Few were wearing masks amid the large crowd.

Dozens of people among the crowd were wearing clothes designating their employment with the Los Angeles city and county fire departments, the Los Angeles Department of Water and Power, the Los Angeles County Metropolitan Transportation Authority and other government agencies.

Many people who appeared to be government employees declined to be interviewed, but a few employees said they were prepared to lose their job over the city's vaccination mandate, which gives them until Dec. 18 to comply.
EMBED More News Videos

"The Vaccine Mandate will cause the loss of a highly trained and skilled workforce in Los Angeles," organizers of the rally said in a statement. "This will not only cause pain, suffering and mental anguish to the employees that are to be terminated, it will also deny the protection, safety and city services the residents of this great city have been afforded by their elected officials who have now created this new set of problems."

The number of municipal employees in attendance was not immediately confirmed. Dec. 18 has been set as the deadline for L.A. city workers to be vaccinated against COVID-19 or risk termination from their jobs.

L.A.'s vaccine mandate has the owner of Margeaux's beauty shop in Los Feliz worried her business isn't going to make it.

"I feel like I just started to pick up, and all of a sudden, it's another blow, and I don't know how I'm going to deal with it. I honestly don't think it's my job to police around and tell people, show me your vaccination card," Margaret Artinian said.

Artinian, who has owned her salon for 38 years, says she supports the vaccine, but with back to back appointments every 30 minutes, she doesn't have the resources to stop and check each customer. Enforcement of the new law won't start until Nov. 19.

But it's a different story across the street at the Italian deli and restaurant La Pergoleta, which wasted no timing displaying the new rules on their front door.

"We have to safeguard the health of our employees and customers," said owner Paolo Seganti.