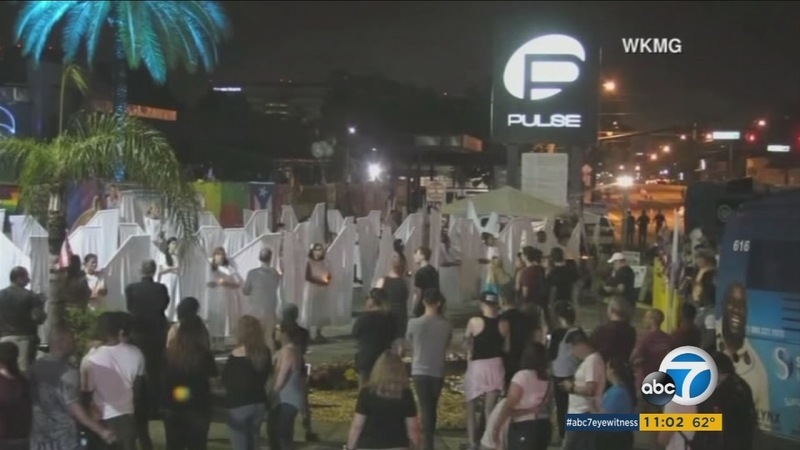 ORLANDO, Fl. (KABC) -- It was an emotional night in Orlando as people began to mark the one-year anniversary of the deadly attack inside the packed Pulse nightclub.

Survivors, victim's families and employees gathered for a private remembrance ceremony as the names of the 49 victims were being read at the moment the first shots were fired.

A colorful tribute full of signs of love lined the memorial at the scene where lives were forever changed.

Edwin Perez, the stepfather of 23-year-old victim Stanley Almodovar III, was one of countless visitors stopping by the memorial before the emotional one-year anniversary.

"Him and the other victims won't be forgotten," he said.

He took hostages inside, leading to a nearly three-hour standoff as police officers and SWAT team worked to rescue survivors.

Almost a year later, the images of that early morning and the emotions in Orlando are still raw. But some in the community see a silver lining: An outpouring of love spawned from an act of so much hate.

"Even though it's devastating, I think there's a lot of beautiful things that come from this. I think it has changed the way people view the gay community and gay people in general," said memorial attendee Nicole Doucette.

A full day of events are planned in Orlando on Monday, including the simultaneously ringing of church bells throughout the city for each of the 49 victims. The day will end with a late-night service at the nightclub.