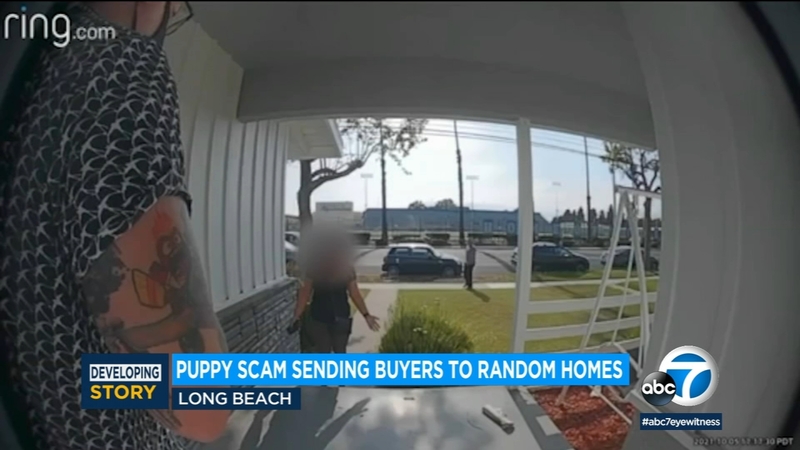 LONG BEACH, Calif. (KABC) -- A new scam that targets people who try to adopt a puppy online has been resulting in victims being sent to random homes, including one in Long Beach, after the scammers get a cash deposit.

The couple who lives in that home says about 20 people or families have shown up at their doorstep thinking that they're picking up a dog. Several of the interactions have been captured by their Ring doorbell camera.

They say it started in January and it has been heartbreaking when they have to break the news to them. The most recent person to knock on their door broke down in tears.

Their concern is that someone will knock on their door, ask for the dog and get very upset that there isn't one there and harm them.

When they contacted Long Beach police, they say they were told there isn't much that could be done.

A North Hollywood family is putting out a call for the public to help them recover two English bulldog puppies that were stolen from their home.

"Because we aren't the one that's being harmed, the police said that they can't do anything to help us and to contact the FTC...and the FBI," said Sarah.

Not all of them come to the door with masks, so the couple says they've also had to be mindful of that and sanitize their porch.

"It's been obviously inconvenient, but it's really been sad because every day, we don't know who's going to come to the door and have their heart broken," said Andrew.

The couple managed to get the phone number of the alleged scammer and have exchanged text messages.

The person at the other end said they would stop sending people to their address for $300. The alleged scammer is apparently using an app that makes it difficult to get information on where you're sending the money.

Meanwhile, Andrew and Sarah say they're concerned for their safety - and that of their toddler. It's gotten to the point that they're going to build a fence around their front yard to keep people away from their door.