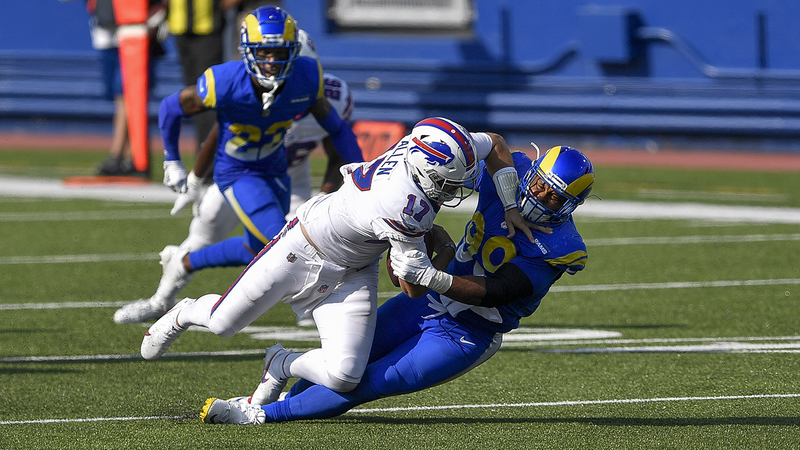 INGLEWOOD, Calif. (KABC) -- The Los Angeles Rams will host the Buffalo Bills to open the NFL 2022 season on Thursday, Sept. 8 as they play their first regular season game since winning the Super Bowl in SoFi Stadium.

The NFL released the full 2022-23 regular-season schedules for all teams Thursday.

The full Rams schedule can be viewed here.

The game against the highly-regarded Bills led by quarterback Josh Allen marks the start of the Rams' attempt to defend their Super Bowl title.

Among notable games on the schedule: the Rams will square off against division rival San Francisco 49ers on Monday Night Football on ESPN (Oct. 10); the matchup against seven-time winning Super Bowl champion Tom Brady and the Tampa Bay Buccaneers (Nov. 6); and cross-town rivals the Chargers, with star quarterback Justin Herbert at the helm on a pivotal late-season Sunday Night Football showdown at Sofi Stadium (Jan. 1). The Rams' bye comes in Week 7.

For the preseason, the Rams are expected to play against the Chargers and Houston Texans in Inglewood and then travel to Cincinnati to play the Bengals for the first time since the Super Bowl matchup last February.

Rams preseason games will be televised on ABC7.

Highlights for the Chargers schedule includes a week 2 matchup against former MVP Patrick Mahomes and the Kansas City Chiefs (Sept. 9) as well as that late-season matchup against the Rams in SoFi Stadium in week 17.

The full Chargers schedule can be viewed here.