Local heroes get to compete with Rams players at SoFi Stadium 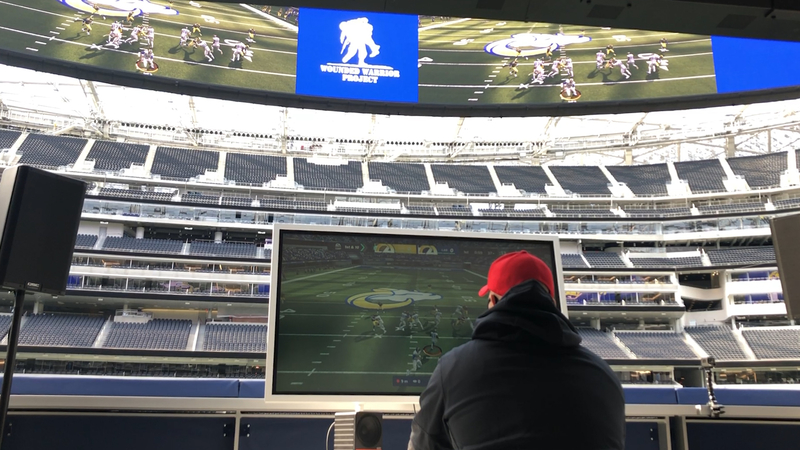 Local heroes get to compete with Rams players at SoFi Stadium

INGLEWOOD, Calif. (KABC) -- While they're still playing football at SoFi Stadium, on Tuesday, they played it virtually. The Rams invited two veterans with the Wounded Warrior Project to participate in a Madden 21 match with Rams Offensive Guard Austin Corbett and Defensive Lineman Morgan Fox.

"Something like this is really important to these warriors because it connects them virtually with other warriors all throughout the country," said Wounded Warrior Project's Outreach Specialist Matt Terry. "And currently, obviously, during the COVID crisis, they're not able to connect in person."

Although it's just a video game, Fox said given everything going on including the pandemic restrictions, it's also a little bit more.

"It's very hard to connect in person and be able to do things personally, face to face," Fox said. "It's a way to connect and still be able to, to have some kind of camaraderie and competition and hang out and just have fun with people outside of your normal stuff."

"The two warriors, John & Nicky sat right on the sideline, field-level, playing Madden 21 while the game was being displayed on the 70,000 square-foot videoboard."

"They were speechless getting to come into SoFi Stadium thanks to the Rams," Terry said. "But this opportunity has really been like a unique way to connect with all the different service members."

The gaming event is part of the Rams third annual Salute to Service week that features a variety of military appreciation events. Fox said he grew up around the military his whole life, so he has a soft spot for veterans.

"Being able to kind of give back and experience anything with guys and men and women who served our country in any way," Fox said. "And just hang out and try to, you know, make their day and a little more fun."