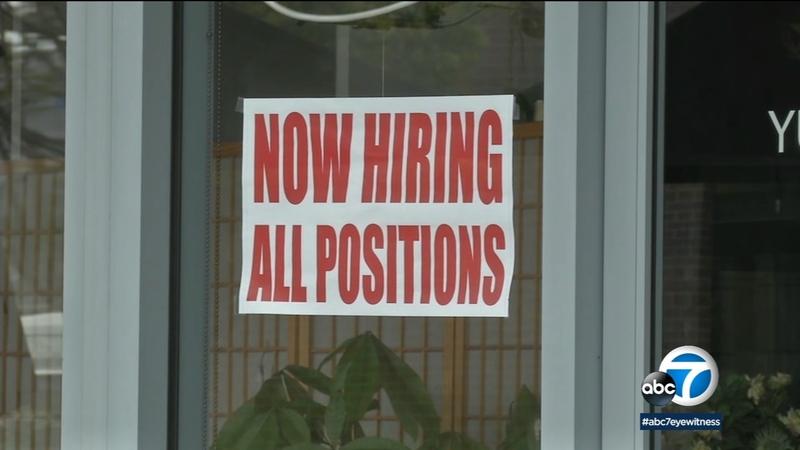 There are "now hiring" signs all across Brea as restaurants look for people to join their team. While it's encouraging to see, it's also an industry-wide crisis across the country.

"The good news is, sales and traffic are coming back strong, and the industry is recovering nicely. A lot faster than we thought originally, but that brings us back to the old challenges we had as an industry -- staffing, finding enough qualified employees," said Victor Fernandez, the VP of Insights and Knowledge at Black Box Intelligence, which tracks restaurant and consumer data to help businesses grow.

He says restaurant staffing was already an issue before the pandemic. Now, it's even more challenging due to everything from an increased minimum wage to expanded unemployment benefits.

"We hear from a lot of restaurant operators that are simply saying a lot of people are thinking about not going back to work right away because they're making as much money or even more by not working," Fernandez said.

Across from the Del Taco and next to the Taco Bell, there is a sign that's hard to ignore: "Eat here or we both starve." It is a simple statement of survival and its resonating with customers.

In the past year, restaurants have been forced to close a number of times, then reopen with tight restrictions. Data from the California Restaurant Association shows that in California alone, 900,000 to 1 million restaurant jobs were lost, and nationwide, one in six restaurants closed.

"How do you convince somebody when they've watched the last year and a half, the pandemic has just ripped this industry apart and trying to get somebody to come in, that's what's tough," said Chad Reinhardt, who owns The Dylan in Brea, which was just rebranded as TOAST. They're one step away from having to recruit cooks from other restaurants.

"We're offering hiring bonuses, referral bonuses, all kinds of different incentives just to get people in the front door," he said.

Reinhardt says many of his former employees were looking for consistency and something stable.

"We've lost a lot of our very talented, very experienced, skilled cooks (who) have switched over to construction or other things, other lines of work that are offering them a steady paycheck where they don't have to worry about going out of business or starting and stopping," he said.

According to job seeking website Glassdoor, those who searched for restaurant server positions before the pandemic pivoted their search to roles like Amazon, data entry, and construction.