The patient, 56, was eventually treated by the paramedics once out the door and was taken to the hospital, where he later died.
KABC
By Leticia Juarez 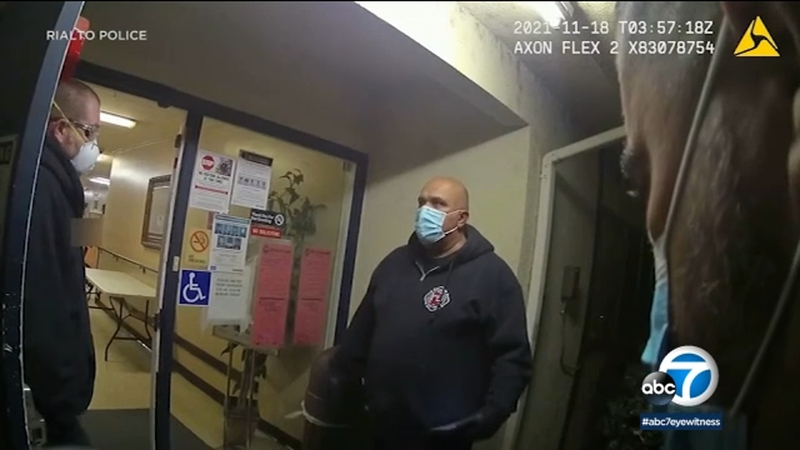 RIALTO, Calif. (KABC) -- The city of Rialto is investigating paramedics who refused to enter a care center despite staff's pleas for help with a patient who was having a medical emergency.

The paramedics told the officer a state law prevented them for entering the facility due to the risk of COVID-19, according to a police report of the incident. In addition, one of the first responders allegedly said, "it was state law and if it was not appreciated, staff should call their congressmen."

The bodycam footage shows the officer head inside to help "distraught hospital employees" push the patient's hospital bed, which did not have wheels, down a corridor. It also shows a nurse on the patient's bed administering chest compressions.

The 56-year-old patient was eventually treated by the paramedics once out the door and taken to Arrowhead Regional Medical Center, where he was pronounced dead.

The incident has prompted the city to launch an investigation.

"They hired a third party law firm to identify the independent third party that's conducting all the interviews because the city wants to let the chips fall where they may at the conclusion of this investigation," said Ortega.

The disturbing video was made public after the Rialto City Council voted to release the video following a complaint to the city by an employee at the care facility regarding the incident. The officer also filed a report documenting the incident.

In response, the Rialto Fire Department's acting Fire Chief Brian Park said in a statement, "The Department personnel under investigation have already been placed on leave pending an independent third-party investigation that is in progress."

As for the state law given as a reason by paramedics for not entering the facility - it does not exist. The first responders may have incorrectly cited an April 2020 memo advising them to reduce their exposure to the virus.

The patient's family is aware of what occurred and of the investigation into it.