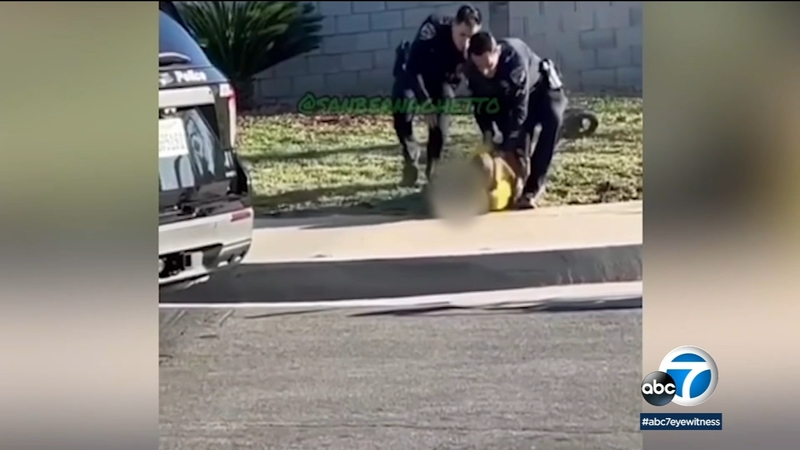 According to law enforcement, the suspect was riding an unlicensed mini bike at a high rate of speed on Feb. 11 just after 4 p.m.

A cellphone video sparked the investigation, which shows the teenager forcefully taken into custody against her will.

After officers attempted to stop her, they say she was uncooperative and refused to provide her last name or address, so they could not give her a citation.

When being taken into custody, the video then shows the officer saying to the suspect, "did you just try to bite me?"

She was charged with resisting arrest by threat of violence and taken to juvenile hall.

"I have personally viewed officer body worn camera footage and although the video depicts the juvenile resisting officers, we are investigating the officer's decision to trip the juvenile to the ground and later placing his hand on the juvenile's throat during the arrest," Police Chief Mark Kling said in a statement.

"After preliminary review of the incident, I have requested an independent investigation by the San Bernardino County District Attorney's Bureau of Investigations to determine if the officer's use of force options were lawful," Kling said. "I have also ordered an internal affairs investigation into the officer's actions. Our investigation will determine if department policies, rules or procedures were violated. Per department directives, confirmed violations of policy will lead to disciplinary action."

In the statement, the department says that the officer, whose identity is being withheld due to the ongoing investigations, has been placed on paid administrative leave.

Kling said the juvenile was released Tuesday from a detention center and reunited with her family. He says the department's Internal Affairs Bureau has spoken to the juvenile's family regarding the incident and heard their concerns.

"We apologize to the juvenile's family regarding these unfortunate circumstances," Kling said. "At a time when our police department strives to build community relationships, we certainly fell short in this encounter. We look forward to building rapport with this family now and in the future."

"We're here yet again at the scene of yet another agency acting poorly and they've been caught on camera," The family's attorney Caree Harper said at a news conference Tuesday.

Harper did not address the biting allegations but said the officer put his hands around the teen's neck.

"This officer who abused my client, threw her down viciously and choked a child," Harper said. "If you choke a child you should be relieved of duty right now, and I'm speaking directly to his supervisors."

The teen's mother only said a few words at the press conference.

"I'm just happy to have my baby back," Lashay Grayes said. "And that was my main fight from the time that I arrived at the station - just to release my baby and to have her home, that's the greatest feeling right now for our family."