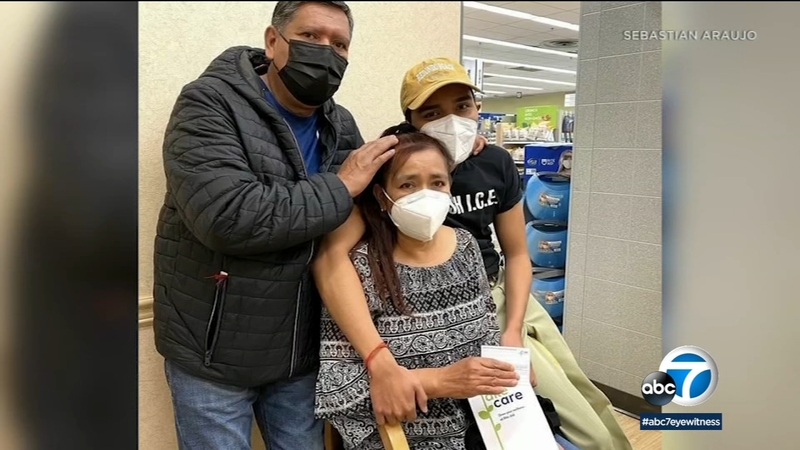 Rite Aid apologizes after refusing to administer vaccine to 2 women

LAGUNA NIGUEL, Calif. (KABC) -- An Orange County father is speaking up for his childcare provider after he says the undocumented woman was brought to tears at a Rite Aid Thursday, when she was denied her COVID-19 vaccination twice in one day, because she didn't have a social security card.

A San Fernando Valley mother celebrated she was vaccinated against COVID-19 days after the woman, who is undocumented, was turned away from a Rite Aid in Mission Hills when she presented her foreign consular ID as identification.

Her son, Sebastian Araujo, took to social media, drawing the attention of Eyewitness News and government leaders like California's 29th District Representative Tony Cardenas, who said legal status in the country is not required to be vaccinated.

"That is not a requirement whatsoever at the federal, state or local level and that organization has been told very clearly that that was wrong and they immediately apologized for doing so, but it left the woman very distraught," Rep. Cardenas said.

Sebastian's mother is not alone.

Just days after the Eyewitness News report on the Mission Hills incident aired Monday, another undocumented woman, this time in South Orange County, was denied her COVID-19 vaccination twice on Thursday, at a Rite Aid in Laguna Niguel.

She didn't want to go on camera, but provides childcare for the Rager family who were heartbroken by the humiliation she suffered. Their babysitter of five years was left in tears.

The father of the family, Kevin Rager, gave Eyewitness News an interview via Zoom.

A San Fernando Valley son took to social media to detail how his mother - an undocumented immigrant - was turned away from getting a COVID-19 vaccine.

"This type of thing should never happen to an individual regardless of where they come from. I come from a family of immigrants. I married an immigrant and things like this just shouldn't happen in our day in age, especially with guidelines that exist now," Rager said.

Rager provided his employee with a letter verifying she watches his children, but that combined with an out-of-state ID wasn't not enough.

The pharmacist insisted on a social security/ card, telling the woman priority goes to U.S. citizens and later repeated this inaccurate information over the phone to the Ragers.

When he researched the guidelines, Rager was shocked to find online the Eyewitness News report from a similar incident just days earlier at the Rite Aid in Mission Hills.

"I just want the government or the companies to send out information to their employees saying that this type of, you know, behavior is just not tolerated. These questions shouldn't be asked of any individual and our entire country needs to get vaccinated so I don't see why somebody should be denied when they actually want to get a vaccine," Rager said.

In both cases, Rite Aid representatives contacted the parties involved to apologize.

Sebastian's mom received her shot at a Rite Aid different from the one where she was turned away.

Where a driver's license and social security card were once listed as acceptable government-issued forms of identification, now there is no mention of a social security card and a note was added reading, "You will not be turned away if you do not have photo ID or insurance."

In emails and over the phone, a Rite Aid spokesperson admitted mistakes were made and said after the incident in Mission Hills, staff were retrained, but why it happened again in Orange County was still under investigation Friday.