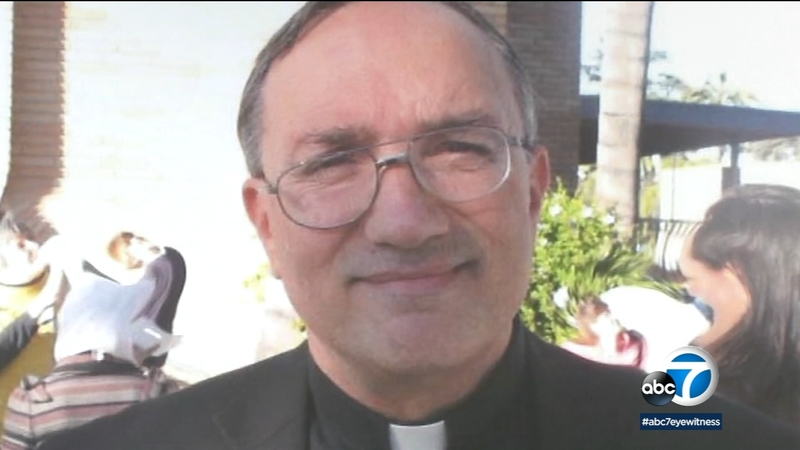 STANTON, Calif. (KABC) -- A priest in Orange County was placed on administrative leave after accusations surfaced that he sexually molested a young boy in the 1990s. Now, the man at the center of the allegations is calling on his removal from the priesthood.

For decades, the now 28-year-old man kept what happened at Saint Polycarp Catholic School in Stanton a secret. He broke his silence after filing a lawsuit against the Roman Catholic Bishop of Orange, as well as Father Edward Poettgen, who is accused of molesting him on two occasions when he was about 5 years old.

"I was easily manipulated and intimidated but I'm not a scared little boy anymore," said the man, who has not been publicly identified.

John Manly, the alleged victim's attorney, claims that church officials tried to keep the accusations quiet when he tried to report what happened about a year ago.

"It was like it was 1985 all over again. They hid it, they concealed," said Manly, who added that the incident was also reported to police.

Father Poettgen is now a priest at Saint Boniface in Anaheim.

"This needs to change. There is nothing more serious than an allegation of child molestation and the Diocese of Orange continues to treat this like it's a traffic violation," Manly said.

In a written statement, the diocese said it cannot comment on pending litigation.

"I feel like a new person. I don't feel scared all the time. I'm not waking up in cold sweats like I was multiple times a week and it's still a rollercoaster ride that I will deal with for the rest of my life but I feel strength at having faced the person who hurt me so badly," the accuser said.
Report a correction or typo
Related topics:
stantonorange countypriest sex abuselawsuitpriest
Copyright © 2022 KABC Television, LLC. All rights reserved.
TOP STORIES
UPS driver, 24, collapses, dies in SoCal heat
Villanueva's former top aide admits belonging to alleged deputy gang
New Glassell Park restaurant at center of gentrification debate
14 suspects grab and run out with merchandise from Century City mall
4th of July fireworks in Southern California: Where to watch
Teen girl speaks out after surviving shark attack at Florida beach
Fewer young Americans want to serve, due to obesity fewer qualifies
Show More
Experts set expectations about 'vaccine efficacy'
Disneyland replacing Splash Mountain with Tiana's Bayou Adventure
New California laws on bars, ghost guns, schools taking effect
Texas Supreme Court blocks order that resumed abortions
Newsom adds restrictions on ghost guns, marketing firearms to minors
More TOP STORIES News