LOS ANGELES (KABC) -- Loneliness and lockdowns have created the perfect scenario for scammers hoping to take advantage of singles looking for love.

According to the Better Business Scam Tracker, reports of romance scams amid the coronavirus pandemic are up nearly 20% over last year, after a drop in incidents in 2019.

Stephanie O'Neill-Snow spent months talking to a man she believed was overseas and in the military before she realized she'd been duped.

"I'm heartbroken. I still get emotional thinking about it," Snow said. 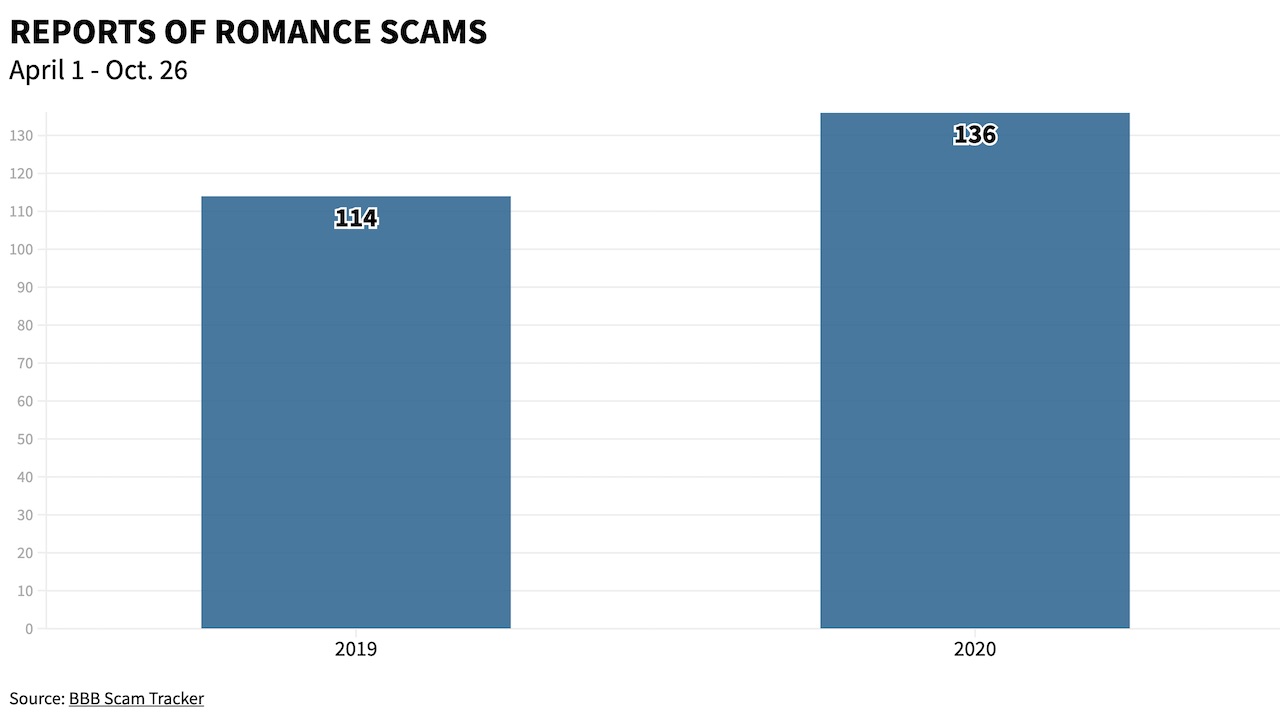 By the time she realized the person she was talking to was not the man she'd seen in pictures but a mystery person she says was operating out of Nigeria, she'd refinanced her home and lost nearly $250,000 trying to support him.

"We were going to get married in South Carolina," Snow said. "Now my bank account is closed."

Snow said her fake lover started asking for money only after things got serious.

She said he made up fake military accidents, troubles with his daughter, and ideas for investments he promised were for their future.

"I was thinking anything to help someone I love," Snow said. "There were so many red flags."

Also victimized are the individuals that scammers impersonate.

King said he only realized what was happening when distraught women began contacting him after becoming suspicious the person they thought they were dating was not who he said he was.

King added that some of the women have threatened to ruin his life and even kill him. He says he still can't get the scammers to stop creating fraudulent accounts with his image.

According to the FBI Internet Crime Report, romance scams were the second costliest scheme in the United States in 2019, costing Americans more than $475 million - second only to losses caused by compromised emails.


Want to view this graph in a larger window? Click here

Baker, the investigator for the BBB, said law enforcement often struggles to track down the perpetrators because they are overseas.

"Where there is not much risk of being caught and there's high returns, it's going to explode," Baker said. "There is more law enforcement going after this these days, thank goodness. But they're barely scratching the surface because this is so incredibly widespread."

The website Social Catfish which helps people verify the authenticity of online relationships has listed several red flags that could indicate the individual behind an online or app-based relationship is part of a scam.

Baker recommends trying to verify the identity of anyone you meet online. He also says to avoid sending money or personal information, and to look for odd grammar in messages and texts.

If you believe you are the victim of a scam, Baker recommends contacting the FBI, the Federal Trade Commission and the BBB.

A Woodland Hills man is facing the scorn of many women he dated and 33 felony charges of fraud and theft.