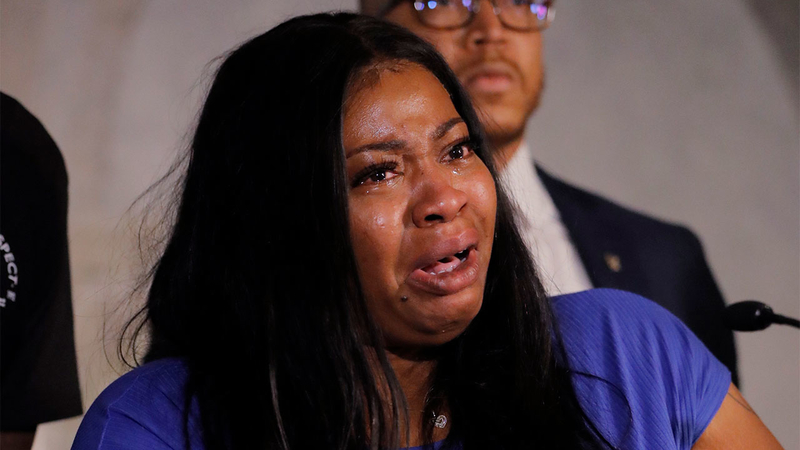 Mother of George Floyd's daughter remembers him as 'good man'

MINNEAPOLIS -- The mother of George Floyd's daughter remembered him as "a good man" during an emotional press conference, sharing a story about the birth of Floyd's daughter and lamenting the fact that she will grow up without her father.

Tuesday's press conference marked the first time Roxie Washington has spoken publicly since George Floyd was killed on Memorial Day. She appeared in Minneapolis alongside her attorneys, Floyd's 6-year-old daughter Gianna and Stephen Jackson, a close friend of Floyd's.

"I want everybody to know what these officers took. At the end of the day, they get to go home and be with their families," Washington said through tears. "Gianna does not have a father. He will never see her grow up, graduate. He will never walk her down the aisle. If there's a problem she's having and she needs her dad, she does not have that anymore."

Later asked to share a memory of Floyd, Washington discussed how Floyd was "so happy to have her" after Gianna was born.

"He slept the whole time that I went through labor, but when he heard her cry, he got up. I still have a picture of him waking up and getting his baby," Washington said. "He loved her. He loved her so much."

Washington explained that Floyd moved from Houston to Minneapolis for work, saying he had continued to take care of his family from afar.

WARNING; GRAPHIC VIDEO: Bridgett Floyd called the death of her brother George "devasting" and "heartbreaking" in an interview with "Good Morning America."

Jackson pledged his support for Gianna and said he would be there to walk her down the aisle in Floyd's absence. He questioned why the other officers present for Floyd's death had not been charged and said he would continue fighting for justice.

"We need justice. We demand it," Jackson said.

The press conference came just hours after the state of Minnesota announced it had launched a civil rights investigation of the Minneapolis Police Department in hopes of forcing widespread changes following the death of Floyd, a black man who died after a white officer pressed his knee into Floyd's neck for minutes, even after he stopped moving.

Four Minneapolis police officers have been fired and one has been charged with murder in Floyd's death.