KABC
By Rob McMillan and ABC7.com staff
NUEVO, Calif. (KABC) -- A miniature horse named Rumble has been found safe after he was stolen from his pen during a brazen theft in Riverside County. His safe return is largely due to the quick thinking of a local store employee.

The 5-year-old buckskin miniature gelding was taken in the middle of the night or early morning hours of April 25, the horse's owner, Brittney Cunningham, said.

Cunningham said his pasture door was open when she came out to feed him. She added that the chain link fence was cut where the horse napper led him out on the street and into a trailer.

Thankfully, Rumble was found safe and sound, mainly thanks to a woman who works at a tractor supply business in Hemet.

The woman was aware that Rumble was stolen. So when two men came into the store to buy supplies to take care of a mini horse, she grew suspicious.

She engaged in conversation with the men, telling them she loved mini horses. She even asked them to show her a photo of their mini horse, and sure enough, the photo was of Rumble.

That's when the woman told them the store had a discount program and asked if they'd like to provide their contact information to join. She also took down their license plate. She provided that information to police, who tracked down the men at a residence and found Rumble.

The men told authorities they bought the horse from another person.

There have been no charges filed against the men as authorities continue their investigation.

Cunningham had offered a $500 reward for anyone who could bring the horse back home. She told Eyewitness News that she plans on giving that reward to the woman at the tractor store for her instrumental role in finding her beloved Rumble.
Report a correction or typo
Related topics:
nuevoriverside countythefthorsesanimalanimals
Copyright © 2020 KABC-TV. All Rights Reserved.
RELATED 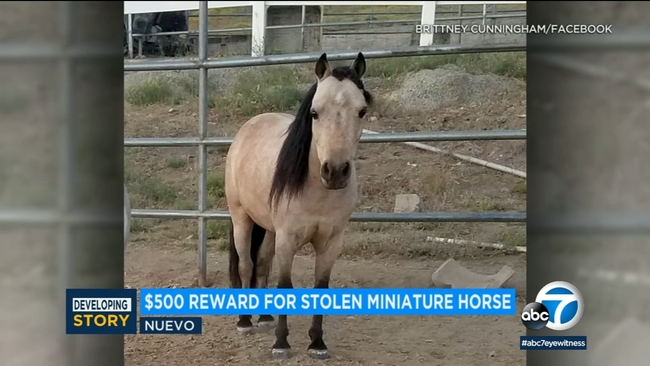