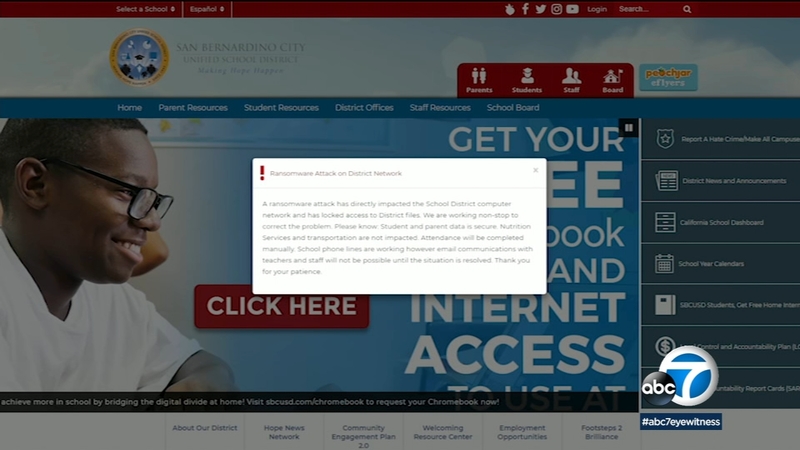 SAN BERNARDINO, Calif. (KABC) -- The San Bernardino City Unified School District was still having issues gaining access to its computer network Monday after it was locked overnight due to a ransomware attack.

A pop-up message was displaying on the district's website, which stated that student and parent data was secure, school phone lines are working, but parents can't send an email to teachers or staff until the issue is resolved.

The district added that it's working around the clock to try to correct the problem.

Ransomware attacks have taken out computer systems at law enforcement agencies and local governments around the country in recent years, forcing them to revert to pen and paper for tasks typically done in an instant on computers.

Ransomware renders files inaccessible unless a computer user pays thieves to release them.

The attacks have slowed commerce by making electronic copies of real-estate records inaccessible and taking down online payment features.

They can also endanger people when they affect critical law enforcement systems or school security.

The cybersecurity firm SecuLore Solutions has used news accounts to document nearly 400 cyberattacks over the last two years against public safety agencies and local governments, more than a quarter of them involving ransomware. And that's likely a fraction of the actual number since smaller attacks that don't affect services probably go unnoticed, said Tim Lorello, the company's CEO.

In July, a ransomware attack forced the Georgia Department of Public Safety to shut down laptops that troopers use in their patrol cars to monitor emergencies and prepare traffic citations, Lt. Stephanie Stallings said. They had to write tickets by hand.

Other big cities that have faced ransomware attacks include Atlanta and Newark, New Jersey. Hackers targeted more than 20 local governments in Texas in a coordinated attack in August that officials characterized as unprecedented in its size.

Small counties, cities and agencies may also not have the money to upgrade their systems and keep them secure, said Tyler Hudak, with the information security firm, TrustedSec.