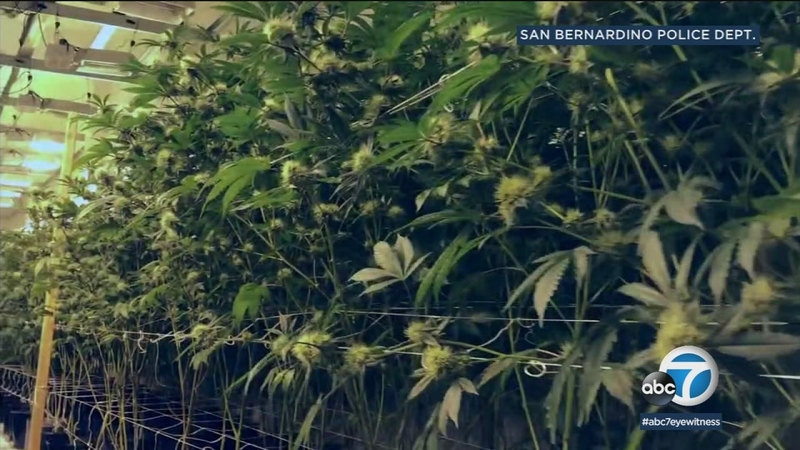 San Bernardino marijuana grow could be largest found in city

Of the three raids, the largest grow operation was discovered inside the old Pacific Bell building in downtown San Bernardino. The building, located in the 600 block of N. E Street, was packed with four floors of wall-to-wall marijuana plants.

Investigators confiscated thousands upon thousands of marijuana plants in various stages of growth.

The operation was fitted with advanced drip-watering systems, and authorities said the electric bill for one month amounted to $67,000.

Police said the owner of the grow operation is a woman named Stephanie Smith, who lives in Pacific Palisades. Smith was detained Wednesday morning.

"This is the largest single grow that I've ever seen for an indoor operation. There's just floors with multiple rooms with plants in various stages of the growing process, and it's a very, very sophisticated operation," said Lt. Mike Madden with San Bernardino police.

Eight people were arrested at the location on suspicion of marijuana cultivation.

Police are not sure how long the pot grow has been in operation. The building was heavily protected with large, concrete block walls, fortified gates and even armed security guards.

Investigators said the owner of this grow was particularly brazen, given the fact that the grow was operating right across the street from school district headquarters and just a street away from the San Bernardino Police Department.

CORRECTION: This story has been updated to note that Stephanie Smith was detained by police, not arrested.

ABC7 has decided to remove the comments section from stories. We believe very strongly that our audience should have an opportunity to discuss and debate events in our world; however, we have not been able to moderate the comments as well as we would like. Instead of hosting a platform that could allow a few loud and ugly voices to dominate a conversation, we want to encourage everyone to join us on our social media platforms and speak out there.
Facebook: facebook.com/abc7
Twitter: twitter.com/abc7
Report a correction or typo
Related topics:
san bernardinosan bernardino countymarijuanapot bust
Copyright © 2021 KABC-TV. All Rights Reserved.
More Videos
From CNN Newsource affiliates
TOP STORIES