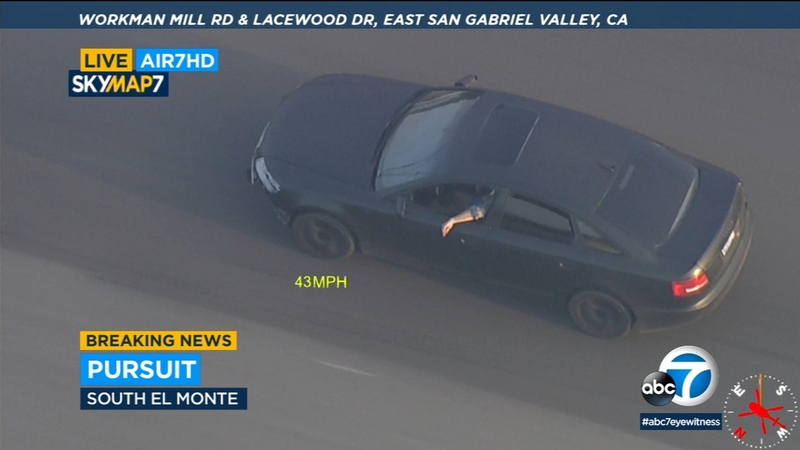 With fuel in his tank, he fled for more than two hours and finally appeared to escape the aerial view of law enforcement by pulling into a parking structure near downtown Los Angeles.

The chase began around 4:10 p.m. with an alleged theft from a Home Depot in the Glendora area.

Authorities chased the suspect mostly over surface streets in El Monte and other communities in the San Gabriel Valley.

Eventually they pulled back and switched to tracking him from the air and from a distance on the ground. The CHP remained in the air over the chase, but local police pulled back.

That gave the suspect time to stop twice at gas stations. The first time he stopped briefly at the convenience store and then left again. A few minutes later he was seen pumping gas into the black Audi.

Law enforcement was not visible on the ground during either of those stops.

Only one person appeared to be inside the vehicle. At times he was driving erratically and weaving through traffic. At other times he got temporarily stuck in traffic and did not try to break free.

A driver stopped twice at gas stations while fleeing authorities in a chase through the San Gabriel Valley Tuesday afternoon.

The driver, who was wearing a Lakers jersey and cap, continued going for more than an hour after the chase began as authorities continued to monitor him. At one point, he changed shirts while stopped in traffic.

More than 90 minutes into the chase, the suspect entered the 10 Freeway westbound, marking the first time he was on a freeway. CHP units continued to track him. He switched over to the 710 Freeway and a few minutes later exited in the East Los Angeles area.

He circled around surface streets for a while and then got onto the westbound 60 Freeway.

With fuel in his tank, the chase lasted more than two hours.

Eventually the suspect pulled into a retail complex near Palmetto and Molino streets on the east side of downtown Los Angeles.