San Jacinto family struggle to have their stolen dog returned

A cherished 3-year-old dog, Nina, was allegedly stolen by a local delivery driver in San Jacinto. The family's neighbor caught the alleged dog-napping on surveillance footage.
KABC
By Leticia Juarez 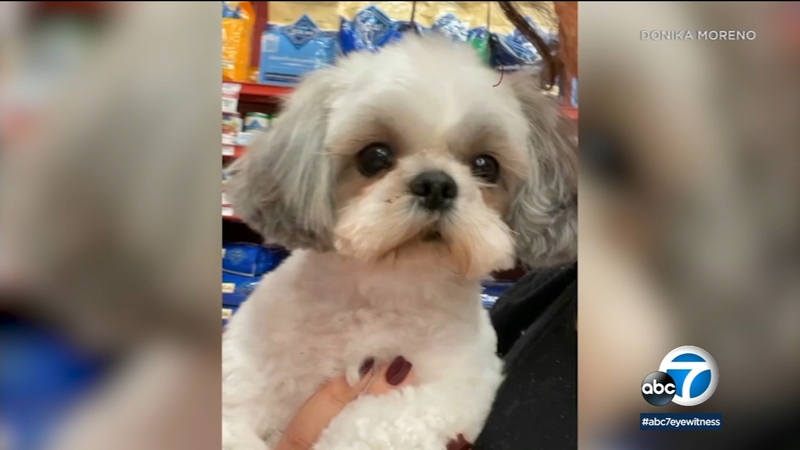 SAN JACINTO, Calif. (KABC) -- A San Jacinto family is struggling to have their 3-year-old Shih Tzu, Nina, returned to them after they say she was taken by a local delivery driver.

"My dogs went up to her, she stands there and picks up Nina. My little white one," says Donika Moreno.

Last Wednesday, a neighbor's security camera captured the alleged dog-napping by a woman delivering a package in a rental van.

Prior to viewing the surveillance footage, the family thought a neighbor may have taken in their dog to keep her safe.

Nina was not wearing a collar or tag when she got out of the family's home.

"I went door-to-door handing out fliers from my street, street behind. Handed out all 100-and-something fliers," says Moreno.

She says she posted to social media, but when they got no responses to their search, they asked their neighbor to check their security camera.

Moreno says her father confronted the driver when she returned to make another delivery and the driver told her she gave the dog to a friend.

"At that point I am like okay, she is trying to take my dog," says Moreno.

She says she contacted the friend who is also a delivery driver for the same company, but she did not have the dog.

Moreno says she eventually spoke to the woman who said she had her dog, but that their agreement to meet and have Nina returned never happened.

"I never got a text from her, never got a call from her, and I could not reach out because she called on a no caller ID," she says.

The delivery contract company told Eyewitness News they are cooperating with the shipping company's investigation into the matter.