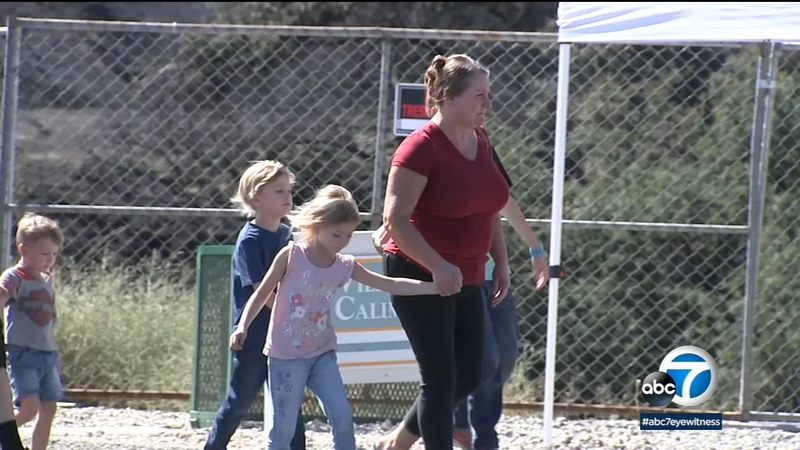 CALIMESA, Calif. (KABC) -- Residents displaced by a fire that tore through their Villa Calimesa mobile home park waited outside to see if they would be able to go inside as they tried returning for a second day in a row.

Unlike Monday, residents were told the mobile park was closed after the Riverside County Department of Environmental Health deemed the area a possible risk due to toxic materials left in the wake of the devastating Sandalwood Fire.

The family of 89-year-old Lois Arvikson was among the groups of residents. They wanted to be near where their mother spent the last few moments of her life and see if there was anything left to salvage.

"We are trying to get in to assess the damage and we know a few things are important but we want to see the rest," said Don Turner, Arvikson's son.

In a sad twist of fate, Arvikson's late husband's first wife also died after a fire tore through the same mobile home park more than two decades ago.

"My mom came to this park through her last husband, Fred Arvikson, and he had lived here 22 years before with a wife. And they had a fire where nine mobiles were lost, and I believe she died as a result of smoke inhalation," said Turner.

Last Thursday, a fire tore through the mobile home park after a trash truck dumped burning trash near an open field. Santa Ana winds helped to carry embers that ignited the blaze that destroyed 76 homes.

Turner said he was on the phone with his mother when they were cutoff.

"I think her thought was she could get her car and leave and be safe and... what she told me was 'I'm going to get my purse and leave,'" he said.

Arvikson is one of two victims who were killed. According to residents, another person stayed to fight the fire with their garden hose and perished in the fire. That person has not yet been identified.

CalFire Riverside said it is continuing to investigate the fire to determine if there is any criminal culpability. So, far no charges have been filed.