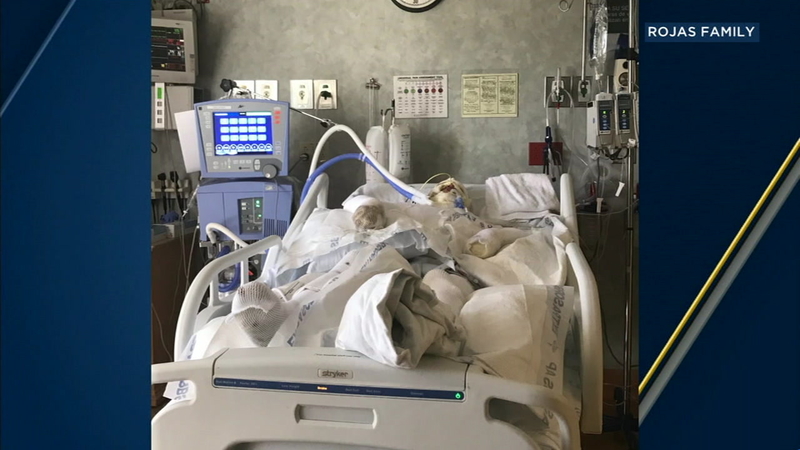 SANTA ANA, Calif. (KABC) -- The family of a burn victim is pleading for help after he was injured in a Santa Ana apartment fire believed to be arson.

Joseph Rojas has spent much of the last two weeks by his younger brother's side at the Orange County Burn Center at OC Global Medical Center. Paramedics rushed 30-year-old Mark Rojas there in the early morning hours of July 11.

"He was in critical condition. He had burns to over 60 percent of his body," said Dr. Andrea Dunkelman, the director of the burn center. "He had inhalation injuries and required intubation immediately."

Mark suffered critical burns when flames engulfed the apartment building where he lives. Three people were injured, Mark the most severely.

Video from the scene shows him wheeled away in a stretcher. Joseph rushed to the hospital after seeing the shot on TV, and he knew it was his brother.

"Most shocking was going into the room and seeing him, as he still is, wrapped up like a mummy. He's intubated and there's tubes coming out of everywhere," Joseph said.

The day of the fire, a woman was detained for questioning. Orange County Fire Authority arson investigators won't release any information about a suspect, only that the fire was intentionally set.

"Our family's very angry that it was not an accident," Joseph said.

As the investigation continues, Joseph and his family are doing everything they can for Mark's long recovery, including starting a GoFundMe page.

They said he's a remarkable human being who loves EDM and video games.

"Though he may be anxious and afraid, that we are not, essentially," Joseph added. "We just want to be a vocal strength for him."