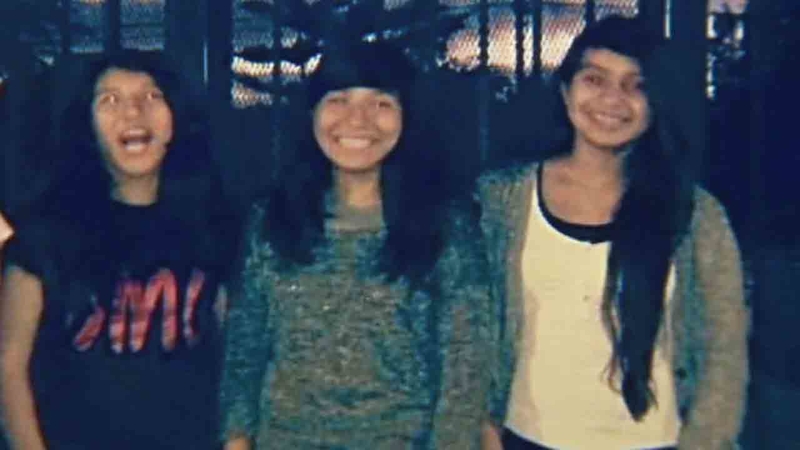 SANTA ANA, Calif. (KABC) -- A memorial of flowers and balloons continues to grow near the scene of the crash where three 13-year-old girls were killed after being struck by a hit-and-run driver in Santa Ana Friday night. Dozens stopped by the vigil throughout the day Saturday to cry, hug and mourn.

The girls were trick-or-treating in the 1400 block of East Fairhaven Avenue when they were hit by a 2001 Honda CRV traveling at a high rate of speed at about 6:45 p.m.

Two of the victims were twins. They were identified as Lexi Perez Huerta and Lexandra Perez Huerta. The Huerta sisters leave behind three other siblings. Both attended Portola Middle School in Orange.

The three teenage girls who were fatally struck by a hit-and-run driver while trick-or-treating Friday night have been identified.

An eyewitness later led police to the abandoned car at a nearby parking lot. The vehicle had extensive damage to the front end.

On Saturday, investigators tracked the SUV to the address where it was registered, but the owner has since moved, Santa Ana police spokesman Anthony Bertagna said.

Investigators collected evidence from the SUV, including fingerprints and DNA samples, he said.

Magaly Huerta, the twins' aunt, says her family is in complete shock.

"They killed what we love the most. Why couldn't they stop the car when they saw my nieces? Why they couldn't do anything? I know God will punish them sooner or later," Huerta said.

The families are asking for donations to help give the three teens a proper funeral. An online fundraiser has been set up to help the Huerta family with funeral costs.

Anyone with further information was asked by police to come forward. Meantime, the girls' families say, no matter what happens, it will never bring their girls back.

"Even if they're in prison a million years, they're never going to be able to repay what they took from the world, I mean, it's three innocent girls," Brenda Gonzalez said.