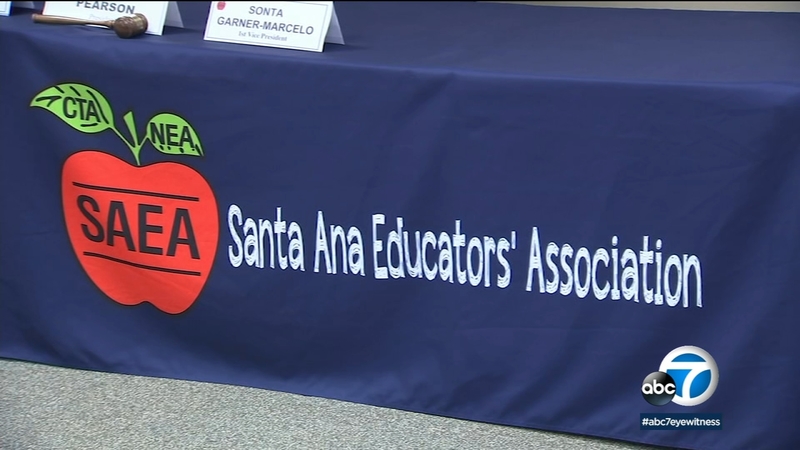 SANTA ANA, Calif. (KABC) -- The Santa Ana Unified School District is working to catch up on missed paychecks for hundreds of employees.

The calls about missing paychecks have flooded the Santa Ana Educators Association (SAEA) office since the end of August. On the other line - hundreds of teachers and other employees with the Santa Ana Unified School District (SAUSD).

Barbara Pearson is president of the SAEA, which represents many of the certificated staff affected and has filed a grievance on their behalf.

"It's unthinkable to not pay people who have been on the job and rendering service to you for the better part of a month," Pearson said.

Pearson said the problem mostly impacted new hires working there on or before Aug. 9.

A spokesperson for the district told Eyewitness News there is a backlog in the processing of employees because of a recent surge in new hires - 350 over the summer and more on the way.

"They knew that this was coming and basically they weren't prepared to do the processing of the paperwork as quickly as it needed to be done," Pearson said.

In addition, Pearson said mistakes were made.

"They ended up with 38 pages of errors in data entry, and so if there's one small piece missing in somebody's total data package, the system will kick them out and not pay them," Pearson said.

The SAUSD did not confirm Tuesday data entry errors played a role and issued the following statement:

Santa Ana Unified School District is working to address delays in paychecks for some staff members. The District assures that these employees will receive their full pay as soon as payments can be processed.

According to Pearson, since the first week of September, the SAEA pushed the district to cut hard checks for those owed money - some receiving payment in full, others partial and just more than two dozen left to be paid as of Tuesday afternoon.

Pearson said as for restitution, per education code, that was part of the grievance filed.