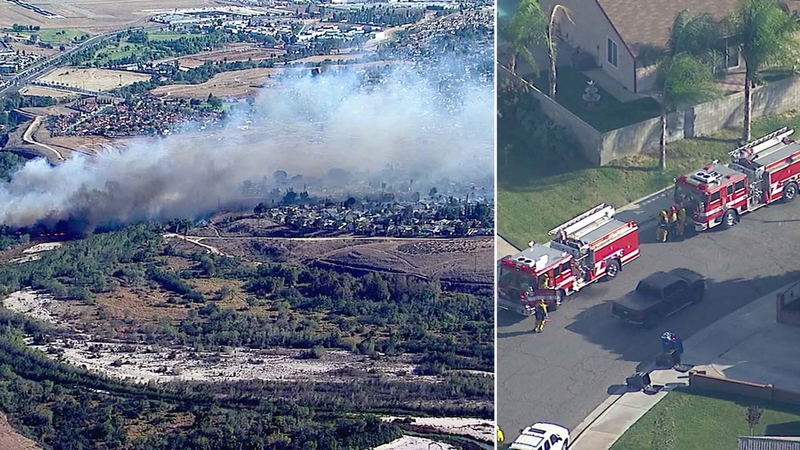 RIVERSIDE, Calif. (KABC) -- A fire broke out close to homes near the Santa Ana River in Riverside on Monday as most of the Southland remains under a red flag warning due to strong winds.

The blaze ignited shortly before 1 p.m. near Julian Drive and Crest Avenue.

About two dozen homes along Julian Drive between Crest and Jurupa avenue were evacuated, and approximately 10 homes were directly threatened. By 2 p.m., the blaze had charred around 10 acres, officials said.

The evacuation orders were lifted by 3:30 p.m. Firefighters said they had stopped the forward spread, but with winds still blowing strong in the area, they expected to remain at the scene for hours.

The wind carried thick, black smoke for miles, and fire engines were seen parked along a densely populated area very close to the blaze.

Powerful Santa Ana winds are bringing a red flag warning to Southern California for most of this week.

The fire broke out around the same time as the end of a police chase in the area.

An incident involving a Riverside County Sheriff's Department deputy-involved shooting occurred at another location. Deputies and the Riverside Police Department chased the suspect and arrested him in the riverbed area.

The fire started in that area around the same time and officials are investigating the possible connection.