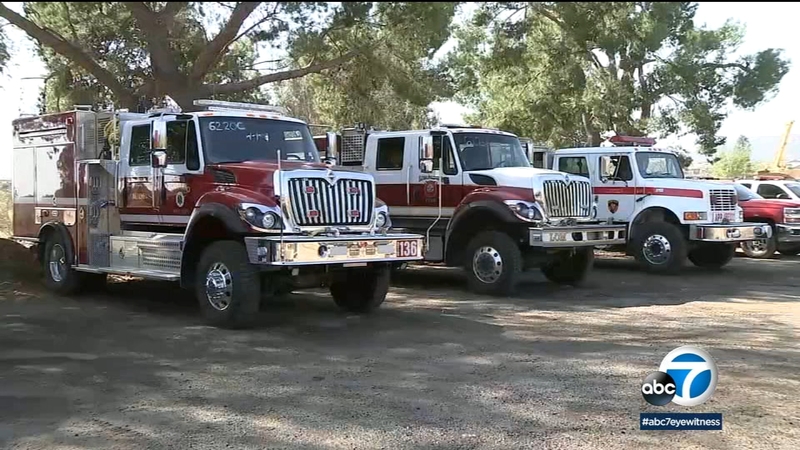 With some of the most powerful Santa Ana winds in years expected to hit Southern California overnight, communities throughout the region are preparing for what could be a very dangerous time for fires.

While temperatures will be cool, winds could hit 50 to 70 mph in parts of Los Angeles and Ventura counties early Wednesday, with gusts in the mountains up to 80 mph.

Already in recent days, the powerful winds have helped fuel damaging blazes like the Getty Fire, the Tick Fire and the Palisades Fire, among others.

SCHOOL CLOSURES
In some communities, schools are already closing in anticipation of the danger.

Cal State San Bernardino announced it will close the campus on Wednesday. The campus will update the community Wednesday night about its status for the next day.

Those are in addition to the dozens of schools that were closed this week for the Getty Fire.

INLAND EMPIRE PREPARATIONS
In the Inland Empire, residents are worried not just about the fires, but about expected power outages. The utility companies have been turning off the electricity at times of high winds in order to reduce the possibility of sparking wildfires.

Rosena Ranch resident Bertha Payas says during one such outage last week, her 80-year-old father was having a heart attack and couldn't get help when he tried calling 911.

"He did (call) but the reception wasn't going through," she said.

Thankfully she says she was able to get home in time to rush him to the hospital.

There are other concerns as well.

"Not only that, it's completely dark, and you're opening it up for criminals to come in and loot the homes," Payas said.

Rosena Ranch resident Eleanor Williams says her husband spent some $1,500 to set up a generator at their home.

It was worth it.

"Every power outage, we've had no problem. We're the only ones that are lit up here," she said.

Thankfully the local school has a generator. So even if the power shuts down overnight, classes will go forward.

At the mouth of the Cajon Pass, four hand crews, dozers, and two full strike teams are standing by.

"Where there might be 40-50 guys every day, today we have over 120," said Jimmy Schiller with the San Bernardino County Fire Department.

Sandy Monson knows all too well the potential danger of Santa Ana winds.

In 2017, the wind-driven Canyon Fire raced through her Anaheim Hills community, destroying her home and about two dozen others.

Just more than a year and a half after losing their house - the Monsons returned, their new home nestled against the same hill they saw go up in flames.

But Monson says their new home is better prepared. Windows are triple-paned, eaves are protected with cement.

"It's a tough go but we had a lot of support through the whole process and its been a blessing and amazing and a lot of learning," she said.

Chad Thompson, a battalion chief with Anaheim Fire and Rescue, says increasing staffing and placing them in strategic locations will help firefighters be prepared.