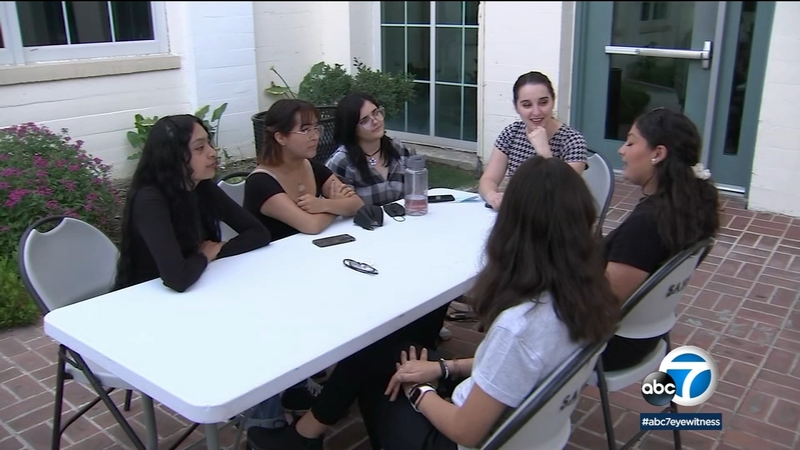 SANTA ANA, Calif. (KABC) -- The Santa Ana High School Women's Speech and Debate Team had a lot to celebrate over the last year.

Their success was possible through hard work, heartache, resilience and advocacy.

Over the summer, they became the first all-Latina squad to win nationals and saw two of their own make it to the final round for the first time.

Their teacher said earning the National School of Excellence Award was a win for the entire city.

That strength did not come without struggle.

Like many students here, this group grew up in low-income, multigenerational households. Some of their loved ones are undocumented.

"We were always worried if they were going to come knocking on our door and if we were next," Ceja said.

Ceja's dramatic interpretation made her a national finalist. Her monologue was a raw portrayal of the effects of our nation's broken immigration system.

"It's struggles and situations that we're going through now and we have to address them and we have to push past these obstacles and these boundaries for us to be able to celebrate freely and without worry and comfortably our culture and our language," Ceja said.

In her original oratory, national finalist Gillian Palacios called out the practice of displaying pain suffered by people of color for entertainment purposes, telling judges to, "quit telling students of color to deliver more emotion and go harder..."

"It's frustrating as a team member, you know. You're trying to lead a team and watching them feel bad because they didn't cater to the image of people of color that they were expecting and so it felt great to give this speech, not only for my teammates, but for every other person who has been through this in this activity," Palacios said.

The founder of this program at the Santa Ana Unified School District, Sal Tinajero, said with tournaments gone virtual because of the pandemic, he noticed his team didn't have the same technology and backdrops as the competition and wasn't ranking as high as it should.

"Then, it hit us. Our students don't have the best broadband. Their Wi-Fi sometimes goes out," Tinajero said, adding, "Can we bring them here and put them in their own room?"

With a more level playing field, they shed light on increasing sexual violence against Latinas through Mexican folklore, dissected the current state of our nation with humor, alongside students from around the world and their strategy became authenticity.

"We're going to tell our stories because when we hit the larger competitions there is very little diversity," Tinajero said.

Guadalupe Guzman's topic was on Latina women in education. She turned to her aunt's experience as a beneficiary of the Deferred Action for Childhood Arrivals program, or DACA, for inspiration.

"It definitely empowered me, like as a woman as a Latina I felt more empowered after going through nationals," Guzman said.

With the odds stacked against them, buried in a sea of more 3,000 students, these mujeres shone through, showing the world the real Santa Ana experience.