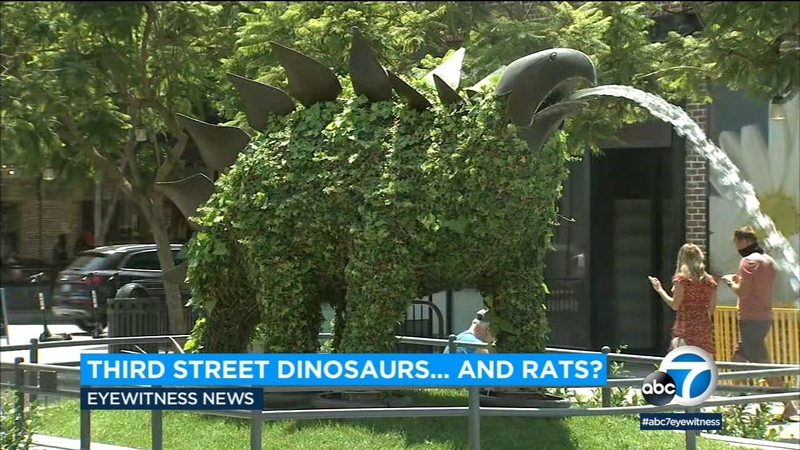 SANTA MONICA, Calif. (CNS) -- A Santa Monica Third Street Promenade property owner is suing the city, alleging two topiaries sculpted as dinosaurs are home to rodents that roam near where people are dining outdoors during the coronavirus pandemic.

EJA Associates LP, which owns a commercial building in the 1300 block of Third Street Promenade, alleges in the Santa Monica Superior Court lawsuit brought Monday against the city and Downtown Santa Monica Inc. that the decorative figures are a public nuisance.

EJA, which leases storefronts to businesses that include Sunsations Travel Store and Hummus Bar Express, wants the city to strip off the ivy on one and the jasmine on the other and replace the underlying screening with a grating that would prevent the rodents from getting inside. The plaintiff also says the rodents should be poisoned or trapped.

Representatives for the City Attorney's Office and DTSM did not immediately reply to requests for comment.

The dinosaur topiaries have been in the promenade since the mid-1980s and are owned by the city and managed, operated and maintained by the city and DTSM, a private, nonprofit organization that works with the city to manage services and operations downtown, according to the lawsuit.

This spring, the plaintiff found out that the topiaries were "infested with swarms of rodents which were routinely running into, out of and around same in the early evening hours," the suit alleges. EJA believes the rodents travel through wire screens forming the bodies of the topiaries that have holes large enough for them to enter and establish nests.

"Accordingly, the rodents which have been permitted to take up residence within the cavities of the dinosaur topiaries frequently move about ... in close proximity to human beings who are present on the Third Street Promenade, including ... those who are patronizing eateries and seated outside due to COVID-19 physical distancing," the suit states.

EJA also believes that rodents have migrated into nearby buildings and other surrounding structures, as well as the alleys behind the promenade, causing significant damage to insulation and heating and air conditioning ducts, according to the suit.

EJA maintains the rodents also can spread disease to human beings, noting they were the cause of the 14th century bubonic plague.

An EJA officer complained to DTSM and the city in March, but his requests "have fallen on deaf ears,'' the suit alleges. One DTSM executive called the dinosaur topiaries "a treasured, cultural art landmark'' and said the EJA officer was "barking up the wrong tree to pursue any modification of the underlying wire screening" because the sculptor who designed them was influential in the community and a DTSM member, according to the suit.

The DTSM executive asked that the EJA officer not contact the Los Angeles County Health Department concerning the rodent infestation because the "Promenade did not need any bad news or PR," the suit alleges. The EJA officer contacted health officials anyway and was told in May that the "owner/responsible party has been notified of the allegations and has been directed to make the necessary corrections," but nothing has been done to date by the city or the DTSM to abate the rodent problem, according to the suit.
Report a correction or typo
Related topics:
societysanta monicalos angeles countyratssanta monica
Copyright © 2022 by City News Service, Inc. All Rights Reserved.
TOP STORIES
Super Bowl: Every fan at SoFi Stadium to receive KN95 mask
California likely to extend paid sick leave amid COVID pandemic
UCLA student beaten, robbed on campus
SoCal man, 5 others accused of sending arsenal to Mexican drug cartel
LA County eyeing crackdown on fake COVID-19 testing sites
SAT going digital in shifting college admissions atmosphere
Tioni Theus: $60K reward under consideration in teen killing
Show More
Dramatic video shows LAPD sergeant save baby from choking
Another round of gusty Santa Ana winds expected late Tuesday
Neil Young wants his music off Spotify due to 'vaccine misinformation'
Biden caught on hot mic calling Fox News reporter a vulgarity
How to get free N95 masks from pharmacies, community health centers
More TOP STORIES News