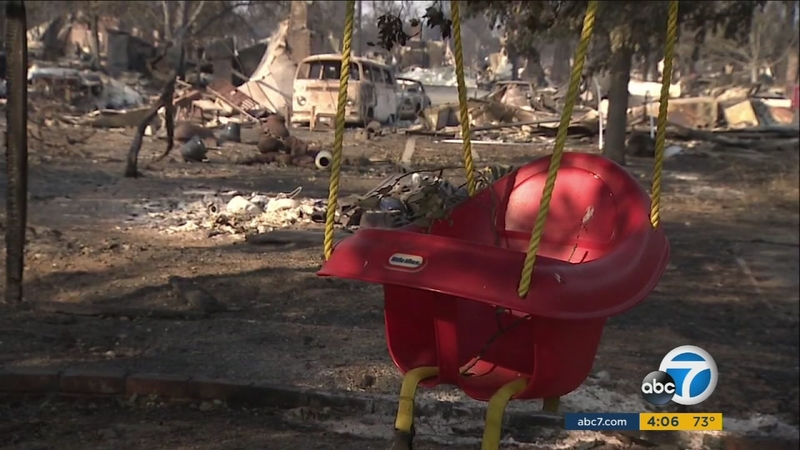 NAPA, Calif. -- A fifth day of desperate firefighting in California wine country brought a glimmer of hope Friday as crews battling the flames reported their first progress toward containing the massive blazes, and hundreds more firefighters poured in to join the effort.

The scale of the disaster also became clearer as authorities said the fires had chased an estimated 90,000 people from their homes and destroyed at least 5,700 homes and businesses. The death toll rose to 36, making this the deadliest and most destructive series of wildfires in California history.

In all, 17 large fires still burned across the northern part of the state, with more than 9,000 firefighters attacking the flames using air tankers, helicopters and more than 1,000 fire engines.

"The emergency is not over, and we continue to work at it, but we are seeing some great progress," said the state's emergency operations director, Mark Ghilarducci.

Over the past 24 hours, crews arrived from Nevada, Washington, Idaho, Montana, New Mexico, North and South Carolina, Oregon and Arizona. Other teams came from as far away as Canada and Australia.

Since igniting Sunday in spots across eight counties, the blazes have reduced entire neighborhoods to ash and rubble. The death toll has risen daily as search teams gain access to previously unreachable areas.

Individual fires including a 1991 blaze in the hills around Oakland killed more people than any one of the current blazes, but no collection of simultaneous fires in California ever led to so many deaths, authorities said.

Dozens of search-and-rescue personnel at a mobile home park in Santa Rosa, also in Sonoma County, carried out the grim task Friday of searching for remains. Fire tore through Santa Rosa early Monday, leaving only a brief window for residents to flee, and decimated the park, which was known as Journey's End and was home to hundreds of people.

Workers were looking for two missing people who lived at the park. They found one set of remains, mostly bone fragments, and continued looking for the other, said Sonoma County Sgt. Spencer Crum.

To help in the search, the Alameda County Sheriff's Office near San Francisco sent specialized equipment, including drones with three-dimensional cameras and five dogs trained to sniff out human remains.

Authorities have said that some victims were so badly burned they were identified only by metal surgical implants found in the ashes that have ID numbers on them.

The influx of outside help offered critical relief to firefighters who have been working with little rest since the blazes started.

"It's like pulling teeth to get firefighters and law enforcement to disengage from what they are doing out there," CalFire's Napa chief Barry Biermann said. "They are truly passionate about what they are doing to help the public, but resources are coming in. That's why you are seeing the progress we're making."

In addition to manpower, equipment deliveries have poured in. Crews were using 840 fire engines from across California and another 170 sent from around the country.

Two of the largest fires in Napa and Sonoma counties were at least 25 percent contained by Friday, which marked "significant progress," said Ken Pimlott, chief of the California Department of Forestry and Fire Protection. But he cautioned that crews would face more gusty winds, low humidity and higher temperatures. Those conditions were expected to take hold later Friday and persist into the weekend.

Smoke from the blazes hung thick over the grape-growing region and drifted south to the San Francisco Bay Area. Face masks were becoming a regular accessory, and sunsets turned blood-red from the haze.

"It's acrid now," said Wayne Petersen in Sonoma. "I'm wearing the mask because I've been here two or three days now. I live here. It's starting to really affect my breathing and lungs."

Fire officials were investigating whether downed power lines or other utility failures could have sparked the fires, but they say they are far from determining how the blazes began.