Unlike most Memorial Day parades, this one in Barstow was organized to show support for about 200 veterans who are fighting to stay in their homes while recent state budget cuts placed the veteran home in jeopardy.
KABC
By Rob McMillan 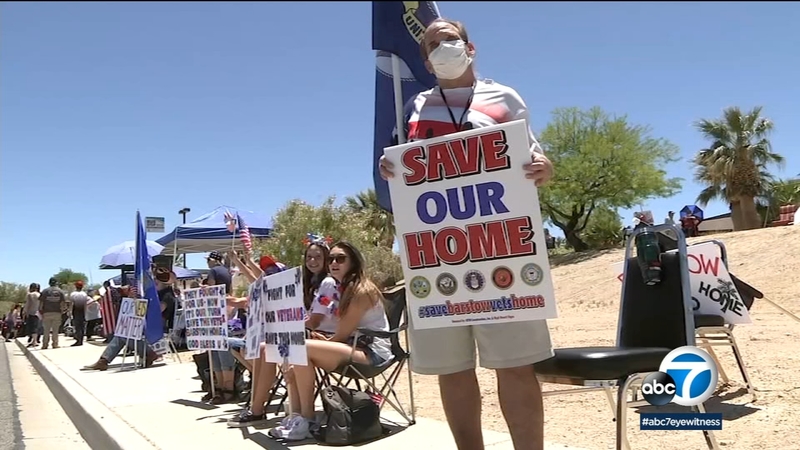 BARSTOW, Calif. (KABC) -- Unlike most Memorial Day parades, this one in Barstow was not meant to honor the fallen, but rather to show support for veterans who are still fighting. Specifically, the parade was to rally around 200 veterans in Barstow who are now fighting for their home.

"They want to show their support for us and that's important that we do get that," said Victor Lopez, a veteran.

It was less than two weeks ago that word came down that this veteran's home was on the chopping block with the state budget deficit projected to be $54 billion.

"Our husbands served, and we got to come here and live here. And we'd like to stay living here," said Renee Ezelle-Coker, a veteran's widow.

BIG BIRTHDAYS: Local veterans, who served in WWII together and remained best friends throughout their lives, celebrated their 96, 97 birthdays with a surprise drive-by parade in Whittier with the help of the L.A. County's Sheriff's department, family and the community.

"I've been here 10 and a half years and I have no other place to go," said Al Granado, a veteran.

Supporters from all across the region came to tell these veterans that they're with them, that they support them. The parade of supporters lasted for nearly two hours.

"The support from the community has been awesome," said Ezelle-Coker.

Supporters believe more than 1,000 people took part in this parade, that went right in front of the Veterans Home of Barstow.

The Memorial Day ceremony is one of the largest commemorations held in Southern California, where local leaders and families have traditionally gathered at the L.A. National Cemetery to pay their respects.

"We've got riders on bikes coming from I think San Diego, as far north as Visalia," said David Jensen, who helped organize the parade.

"We shouldn't be balancing the budget on the backs of veterans who've already paid their debt," said Jensen.

The state legislature will have the final word as to whether to this place will be shut down.

The governor's office says it could eventually save the state $14 million per year, but not if any of these people have anything to do with it.

Michelle Charlesworth reports on the 13-year-old Boy Scout's special tribute to veterans who have died amid the COVID-19 pandemic in New Jersey.

"I think it's wonderful, it's great, yeah it's great. Makes me want to wave the flag again," said Granado.

And the thought isn't lost on these veterans that while they may have fought for our freedom, these supporters are now fighting for them.