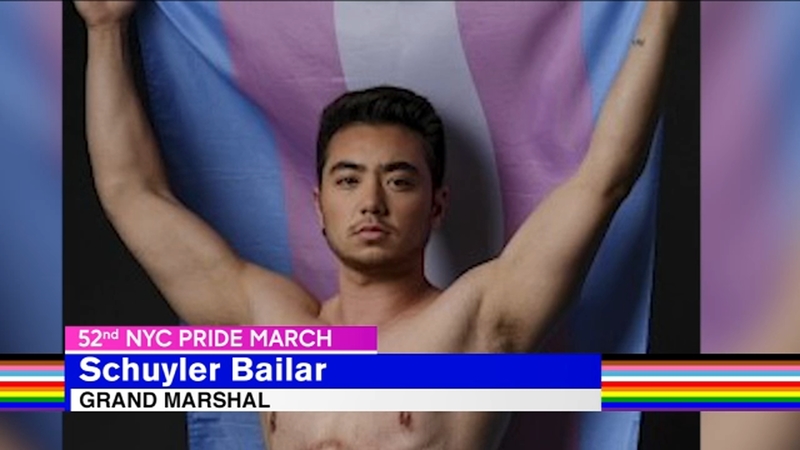 NEW YORK CITY -- A swimmer who made history as the first transgender athlete to compete on an NCAA Division I Men's team, is now one of the Grand Marshals of this year's Pride March in New York City.

Schuyler Bailar is not only okay with being the first, but considers it a badge of honor.

The 26-year-old is the first openly transgender Division I swimmer to compete as a man.

Another first for Bailer -- holding the title of Grand Marshal in New York City's Pride March on Sunday.

"I feel a lot of power in my identity and being open about my identity as a queer, Korean American, mixed-race transgender swimmer," Bailar said.

In 2013, Schuyler was recruited as a member of Harvard University's Women's swim team.

His struggle with identity started at an early age. The only place he felt at ease was in the water.

"I no longer feel like a person or a body or a man or whatever, I'm just the act of swimming," Bailar said.

In 2014, he began transitioning and eventually joined the university's Men's swim team.

After graduating in 2019, he quickly realized there was much work to be done. He considers progress, not linear, but rather more three-dimensional.

Right now, Bailar is taking a break from swimming due to a shoulder injury and is focused on his new, online subscription-based experience called LaneChanger.

"You can go onto this online platform and learn at your own pace, I am there, walking you through all these topics," Bailar said.

They range from the most basic topic to those which are uncomfortable, but necessary.

His goal for others is to embrace, rather than erase the trans community.

"If I can hand you my humanity, there's a chance you'll walk into your own and at that point we can connect," Bailar said.

Submit a tip or story idea to Eyewitness News