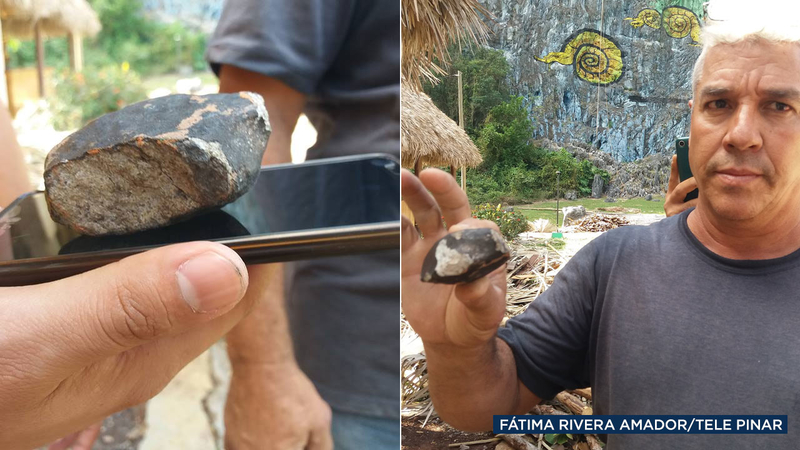 HAVANA -- Residents and tourists in the town of Vinales in western Cuba say they saw a flare pass through the sky and heard an explosion in what state media say may have been a meteorite.

The ball of fire and smoke trails appeared in a clear midday sky Friday and residents said there was a rain of small black stones that did not cause any material or human damage in Vinales in Pinar del Rio province. People said they also heard explosions in Havana.

Here's a picture of some of the fragments from the meteor that likely exploded over the province of Pinar del Río, near the town of Viñales, Cuba. #flwx #KeyWest #FloridaKeys #meteor https://t.co/QNAEr8cEVN

Amid speculation on social media, Cuban state media denied that any planes had crashed, calling it a "natural, physical phenomenon."

State-run Juventud Rebelde said a team of specialists from Cuba's Geophysics and Astronomy Institute had been sent to Pinar del Rio to study a possible meteor strike.

@NWSKeyWest radar may have detected the meteor that affected western Cuba earlier today. At 121 pm, a signature was detected near Viñales, Cuba, at a height of over 26,000 ft above ground level. #flwx #KeyWest #FloridaKeys #meteor pic.twitter.com/R2JIlVwpsS