Total solar eclipse to sweep US for 1st time in 99 years; Find out when, where 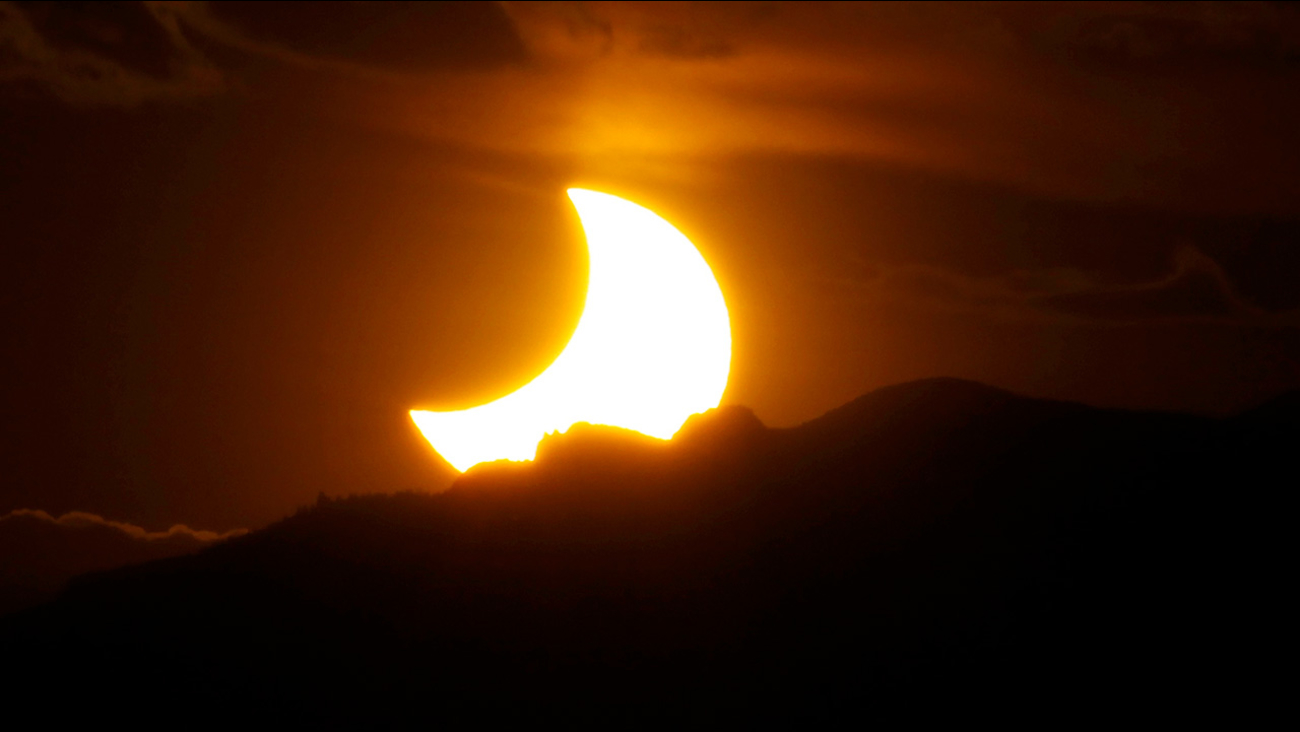 In this May 20, 2012, file photo, the annular solar eclipse is seen as the sun sets behind the Rocky Mountains from downtown Denver. (AP Photo/David Zalubowski)

Total solar eclipses occur every year or two or three, often in the middle of nowhere like the South Pacific or Antarctic. What makes this one so special - at least for Americans - is that it will cut diagonally across the entire United States.

The path of totality on Aug. 21 - where day briefly becomes night - will pass over Oregon, continuing through the heartland all the way to Charleston, South Carolina. Those on the outskirts - all the way into Canada, Central America and even the upper part of South America - will be treated to a partial eclipse.

The last time a total solar eclipse swept the whole width of the U.S. was in 1918.

No tickets are required for this Monday matinee, just special eclipse glasses so you don't ruin your eyes.

Here are some eclipse tidbits as you get ready to feast your protected eyes on perhaps the greatest of all cosmic spectacles.

When the moon passes between Earth and the sun, and scores a bull's eye by completely blotting out the sunlight, that's a total solar eclipse. The moon casts a shadow on our planet. Dead center is where sky gazers get the full treatment. In this case, the total eclipse will last up to 2 minutes and 40 seconds in places. A partial eclipse will be visible along the periphery. Clouds could always spoil the view, though, so be ready to split for somewhere with clear skies, if necessary.

The path of totality - meaning total darkness - will begin near Lincoln City, Oregon, as the lunar shadow makes its way into the U.S. This path will be 60 miles to 70 miles wide; the closer to the center, the longer the totality. Totality will cross from Oregon into Idaho, Wyoming, Nebraska, Kansas, Missouri, Illinois, Kentucky, Tennessee, Georgia, North Carolina and, finally, South Carolina. (It will also pass over tiny slivers of Montana and Iowa.) The eclipse will last longest near Carbondale, Illinois: approximately two minutes and 40 seconds. The biggest cities in the path include Nashville; Columbia and Charleston, South Carolina; Salem, Oregon; Casper, Wyoming; and just barely within, Kansas City, Missouri.

WHEN'S THE NEXT ONE?

If you miss the Aug. 21 eclipse - or get bitten by the eclipse bug - you'll have to wait seven years to see another one in the continental U.S. The next total solar eclipse will be in 2019, but you'll have to be below the equator for a glimpse. We're talking the South Pacific and Chile and Argentina. It's pretty much the same in 2020. For the U.S., the next total solar eclipse will occur on April 8, 2024. The line of totality will cross from Texas, up through the Midwest, almost directly over Indianapolis, Cleveland and Buffalo, New York, up over New England and out over Maine and New Brunswick, Canada. Carbondale, Illinois, will be in the crosshairs once again.
Report a correction or typo
Related topics:
sciencescience
Copyright © 2021 by The Associated Press. All Rights Reserved.
More Videos
From CNN Newsource affiliates
TOP STORIES