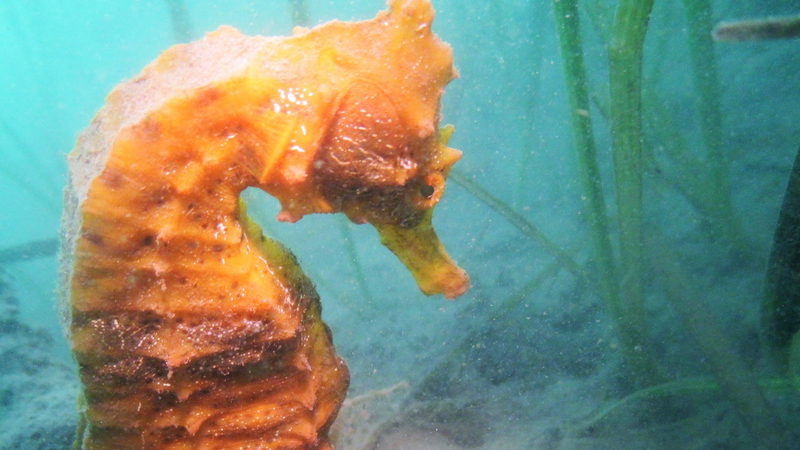 LONG BEACH, Calif. (KABC) -- Roger Hanson has been diving for over 30 years, so he knew it was odd when he spotted a Pacific seahorse in Alamitos Bay in Long Beach around four years ago.

"They are very, very rare," said retired schoolteacher from Iowa. "Long Beach having a colony is unlike any city in California."

In 2016, Hanson started driving 80 miles from his home in Moreno Valley to Long Beach around five days a week in order to care for, and study, the underwater creatures.

"There are 11 biomes that are manmade and biodegradable in the bay," said the 69-year-old. "It's kind of like a jungle; they like the canopy effect."

Over the years, Hanson has used thousands of sticks, eel grass, and palm fronds to replenish the colony's home in an undisclosed location in the bay. He keeps binders of meticulous notes, detailing the behaviors of each seahorse that Hanson has named, such as Daphne, Bathsheba, and CD Street.

"There aren't a lot of studies that are long-term with animals that are smaller because it's harder to tag them," said fellow diver and friend, Ashely Arnold. "As a volunteer study, we've learned so many things about these sea horses."

Hanson estimates that he has completed 1,222 dives in the colony. He believes he has spent close to 500 hours with the seahorses since 2016.

"Sea horses, in general, are fascinating fish," said Dr. Sandy Trautwein, the Vice President of Animal Husbandry at the Aquarium of the Pacific. "The most fascinating thing, to me, is that it's the males, not the females, who give birth to young."

Typically, Pacific seahorses are only found from San Diego, California to Peru. Trautwein and Hanson suspect that warm ocean temperatures caused the seahorses to migrate north.

"When you spend time with a very gentle species, it rubs off on you," said Hanson. "I think I've learned to apply the word 'empathy' more. It's always a challenge on land, but that's what they taught me underwater."