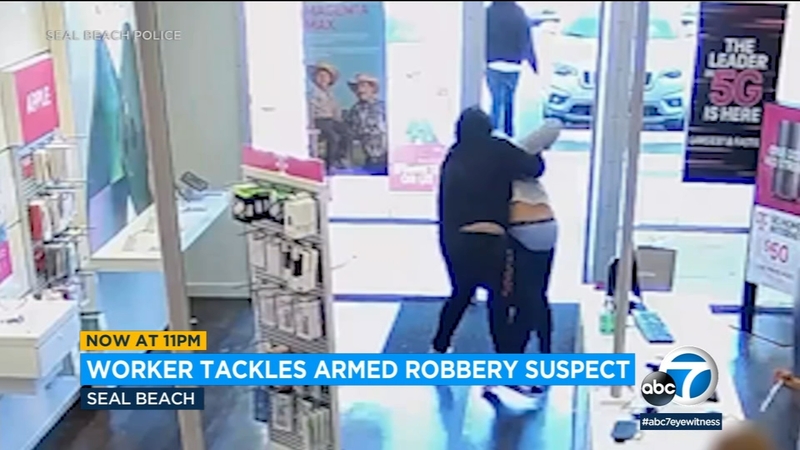 SEAL BEACH, Calif. (KABC) -- An employee at a T-Mobile store in Seal Beach is lucky to have come out of a fight with an alleged armed robber unscathed. The incident was caught on video.

Seal Beach police say that two men came into the T-Mobile store located at 12800 Seal Beach Boulevard at about 3:20 p.m. on May 10.

At least one of the suspects was seen on the store's surveillance video appearing to try to cut the security cables affixed to high-end cell phones.

That's when the store's employee catches a glimpse of what's happening and decides to get involved.

It's unclear if that individual was the second suspect in the case.

The two men fall to the ground and struggle for a few seconds inside the store before stumbling to the outside where the struggle continued.

Eventually, the video shows the suspect escaping the employee and leaving the area.

One witness told police that the suspect was holding a gun in his hand during the fight, according to officials.

Police say the gun was not fired in the incident and the employee was not injured, but both of the suspects involved got away in a gold-colored Lexus sedan.

Investigators describe one suspect as a Black male in his late 20s, about 6 feet tall, weighing 180 pounds, and was seen wearing a black jacket and dark jeans.

The second suspect is described as a Black or Latino male in his late 20s, approximately 5 feet 8 inches tall, weighing 160 pounds, and was seen wearing a light grey jacket and grey sweatpants.

Anyone with information about this case is asked to call Detective Ryan Bedard at (562) 799-4100 ext. 1113, or email rbedard@sealbeachca.gov.