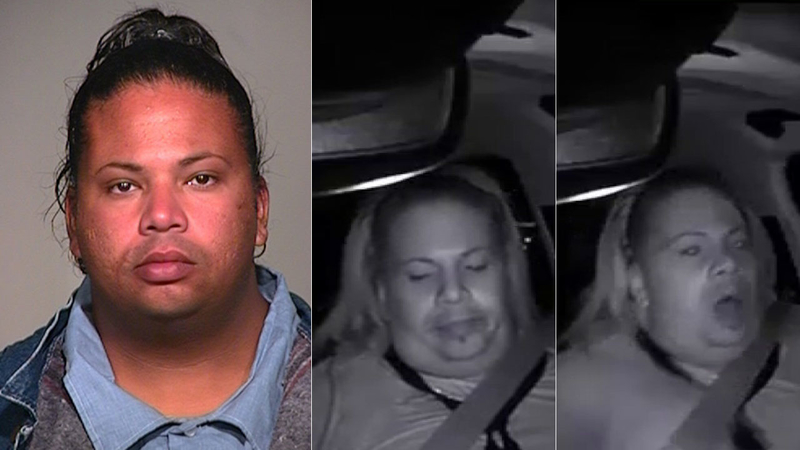 TEMPE, Ariz. (KABC) -- The safety driver behind the wheel when a self-driving Uber car struck and killed a pedestrian in Arizona served time in prison for two felony convictions, but met the company's requirements for hiring, according to officials and public records.

The self-driving car struck a woman who was crossing the street with a bicycle at night Sunday.


Video released from inside the vehicle's viewpoint appears to show the pedestrian coming out of nowhere, illuminated by the vehicle's headlights only seconds before she is struck and killed.

Video also shows the backup driver in the vehicle alternately glancing down and at the road, then reacting with shock just before the collision.

The Volvo was in self-driving mode with a human backup driver at the wheel when it struck 49-year-old Elaine Herzberg as she was walking a bicycle outside the lines of a crosswalk in Tempe, police said.

Tempe police have identified the driver as 44-year-old Rafael Vasquez.

Court records show someone with the same name and birthdate as Vasquez spent more than four years in prison for two felony convictions - for making false statements when obtaining unemployment benefits and attempted armed robbery - before starting work as an Uber driver.

Local media outlets in Arizona have said Vasquez is the same person in the prison records, though there remain discrepancies in the driver's first name, reported by some outlets as Rafaela.

Attempts by the Associated Press to contact Vasquez through phone numbers and social media on have not been not successful.

The fatality has raised questions about whether Uber does enough to screen its drivers.

Uber's policy on hiring people with criminal backgrounds states "Everyone deserves a fair chance." It says the company is proud to offer second chances to those who have paid their debt to society.

"Most people just want to make an honest day's living, but far too often, there are barriers in place that prevent people from accessing work. That is especially the case for the over 70 million Americans with criminal records," the company said.

The company bans drivers convicted of violent crimes or any felony within the past seven years. Records show Vasquez' offenses happened before the seven-year period, in 1999 and 2000.

The company's website lists its pre-screening policies for drivers that spell out what drivers can and cannot have on their record to work for Uber.

Their driving history cannot have any DUI or drug-related driving offenses within the past seven years, for instance. They also are prevented from having more than three non-fatal accidents or moving violations within the past three years.

Officials are still investigating the accident and there have been no determinations publicly announced yet as to whether the safety driver, the autonomous system itself or the pedestrian were to any degree at fault.

Experts who viewed the video told The Associated Press that the SUV's sensors should have seen the woman pushing a bicycle and braked before the impact.

Also, Uber's human backup driver appears on the video to be looking down before crash and appears startled about the time of the impact.

"The victim did not come out of nowhere. She's moving on a dark road, but it's an open road, so Lidar (laser) and radar should have detected and classified her" as a human, said Bryant Walker Smith, a University of South Carolina law professor who studies autonomous vehicles.

Sam Abuelsmaid, an analyst for Navigant Research who also follow autonomous vehicles, said laser and radar systems can see in the dark much better than humans or cameras and that the pedestrian was well within the system's range.

"It absolutely should have been able to pick her up," he said. "From what I see in the video it sure looks like the car is at fault, not the pedestrian."