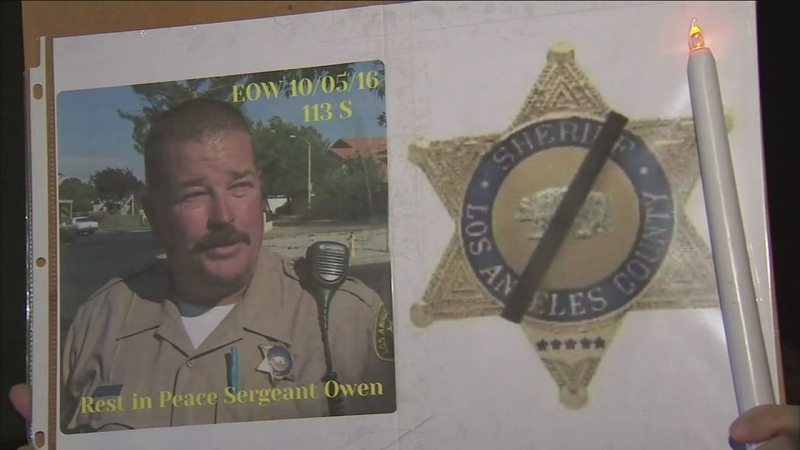 Antelope Valley community members and sheriff's deputies mourned Owen with a candlelight vigil in Lancaster Wednesday night. He was also honored in a law enforcement procession along the freeways as his body was transported from Lancaster to the coroner's office in Boyle Heights.

"It's a very difficult time, as you can imagine, for the many members of our department. We're all suffering," Capt. Steven Katz said during an afternoon press conference.

MORE: LASD sergeant dies after being shot in Lancaster; 1 in custody

Katz said Owen's wife, his adult son and daughter, and his mother were able to see him in the hospital before he died.

Owen's wife is an arson explosives detective with the sheriff's department, officials said.

"Steve was doing what many, many, many deputies and police officers countrywide, nationwide are going to be doing today and tonight," Executive Officer Neal Tyler with the sheriff's department said.

Owen, who served with the sheriff's department for 29 years, was awarded the Meritorious Conduct Medal in 2014.

.@abc7leo remembers his friend, slain Sgt. Steve Owen, who was shot and killed by a suspect in Lancaster https://t.co/aHm8Qj6SJH pic.twitter.com/PsViwCJF6Y

The sheriff's department said Owen helped rescue a hostage being held at gunpoint on Nov. 26, 2013.

Owen was instrumental in devising a plan to safely rescue the hostage, keep deputies out of harm's way and take the suspect into custody alive, according to the sheriff's department.

Sgt. Steve Owen was remembered for his work with youth activities and with the Antelope Valley community.

Sheriff's officials said Owen, who had spent the last five years at the sheriff's department's Lancaster station, was well known in his community.

"Steve was very important to the Antelope Valley community," Tyler said. "He's extremely popular with everyone up here because he goes above and beyond with respect to youth activities and community involvement."

"The tragedy of a deputy sheriff such as Sergeant Steve Owen making the ultimate sacrifice has a massive impact on the whole law enforcement family. We all mourn together and our hearts go out especially to Steve's immediate family Tania, a detective at Arson/Explosives Detail, his two adult sons Brandon and Chad, a step-daughter Shannon and his mother Millie."
Los Angeles County Sheriff Jim McDonnell

"Anne and I extend our deepest condolences to Sergeant Owen's family and friends during this difficult time. We join the Los Angeles County Sheriff's Department - and all Californians - in honoring his courage and service."
Gov. Jerry Brown

"A courageous and decorated hero risked his life for the last time today. Steve Owen, a 29-year veteran of the Los Angeles County Sheriff's Department, was killed while responding to a plea for help -- a plea like so many others in the course of a deputy's or an officer's day. My heart is heavy for Sgt. Owen's wife and children, for law enforcement officers everywhere, and for their families, who contend every day with the fear of losing loved ones who live to protect and serve our communities."
Mayor Eric Garcetti

"Sgt. Owen was an outstanding law enforcement professional who I had the opportunity to know and work with. He was a husband and father who was respected by his colleagues and engaged in his community. He was senselessly murdered while responding to a call for help. His loss leaves a significant void for all those who knew him. Christine and I send prayers and condolences to his family and fellow deputies."
Los Angeles County Supervisor Mike Antonovich