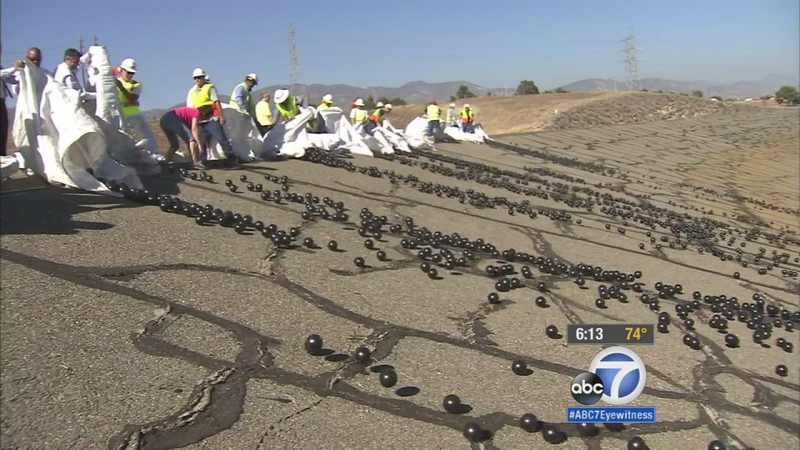 The Los Angeles Department of Water and Power project involved the release of 96 million shade balls into the reservoir at the Van Norman Complex in Sylmar.

"This is a blend of how engineering really meets common sense. We saved a lot of money, we did all the right things," said LADWP General Manager Marcie Edwards.

Los Angeles was the first city in the United States to use shade balls, which now cover three other reservoirs. The 4-inch balls are weighted down with water inside, which helps keep them in place to block out sunlight on the water's surface.

The black, plastic shade balls, which are made in Los Angeles for 36 cents, protect the water against dust, rain, birds, wildlife and chemical reactions caused by the sun. It also helps keep the water in the reservoir from evaporating.

Mandated by the Environmental Protection Agency to cover all reservoirs, initial estimates came in at $300 million to cover the 175-acre facility, but the shade balls cost less than $35 million. These major savings, both financially and environmentally, are setting Los Angeles ahead of the curve.

"While it's meeting the minimum standards, we want to go beyond that and have the healthiest water so we've been spreading these balls everywhere," Garcetti said.

City officials say shade balls last about 10 years. The LADWP says they will be removed, recycled and replaced.