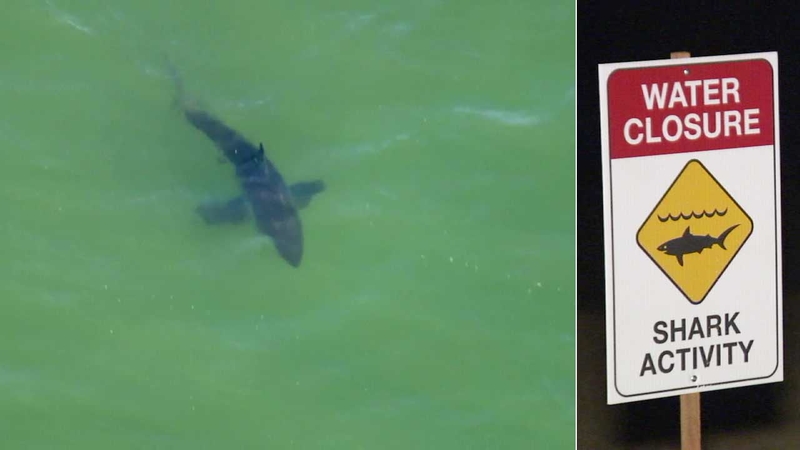 HUNTINGTON BEACH, Calif. (KABC) -- Sharks were spotted not far from the coast of Sunset Beach in Huntington Beach on Monday.

Late Monday morning, officials briefly reopened a more than mile-long stretch of Sunset Beach after determining there were no sharks close enough to shore to pose a danger to swimmers and surfers.

However, officials quickly shifted gears when multiple sharks made another sudden appearance just before 5 p.m., crowding around the shore. This forced officials to shut the beach down again.

AIR7 HD captured two to three sharks swimming and seals in the area, which could be attracting them closer to the coastline.

The sharks, some up to 12 feet long, were approximately 150 feet offshore. Huntington Beach lifeguards posted signs along the beach warning swimmers to stay out of the water.

The beach reopened Tuesday, but advisory signs remained as a precaution to the public.

The water off of Sunset Beach has been reopened to the public. Shark advisory signs will remain in place as a precaution.

Researchers plan to visit the beaches to investigate just how many sharks are hugging the coast and learn more about why.

"The reason why we think the babies are close to shore is because that provides a safe habitat for them. That's a safe place for them to kind of hang out, and there's also easy available food source - lots of sting rays, which they love to eat," said Dr. Chris Lowe with the CSULB Shark Lab.

Closures following a shark sighting typically last between 12 to 24 hours.