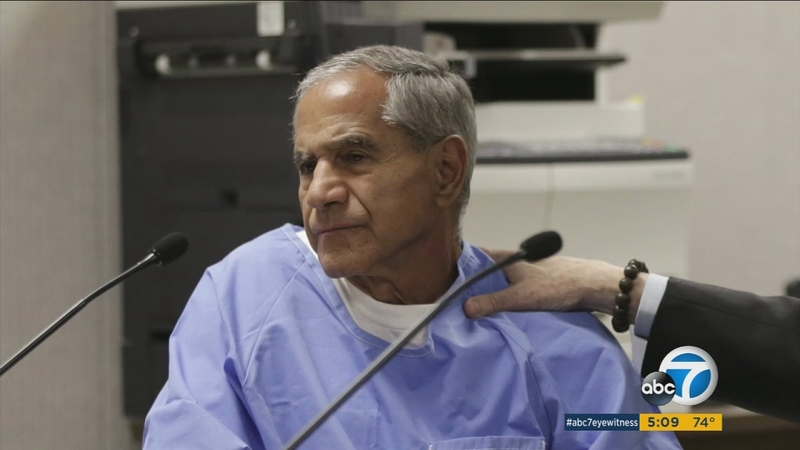 SAN DIEGO (KABC) -- Sirhan Sirhan sat before a parole board inside Donovan State Prison in San Diego for a 15th try at freedom. Sirhan, who is now 71, is serving a life sentence for assassinating Sen. Robert F. Kennedy nearly 50 years ago.

Sirhan shot the presidential hopeful in a crowded kitchen in the Ambassador Hotel in Los Angeles on June 5, 1968.

Kennedy died the following day. Five others were shot and wounded, including Paul Schrade, who is now 91-years-old. Schrade faced Sirhan for the first time since he testified at Sirhan's trial.

"I was glad to be there to tell him I forgave him for what he did to me because he didn't know what he was doing to me. I was an innocent bystander," said Schrade, a friend of Kennedy who was the western regional director of the United Auto Workers Union when he was shot.

Schrade was walking behind Kennedy when the assassination happened. Schrade said he'd been looking into the shooting since 1974 and claimed new evidence, that included an audio tape where 12 shots are heard being fired, proved there was a second shooter.

He said Sirhan had already been captured, his gun hand pounded down on a table in the kitchen and pointed away from Kennedy when he fired off shots.

"Kennedy got hit in the back, where Sirhan never got close to," said Schrade.

During the hearing, Schrade repeatedly apologized to Sirhan for not coming to previous parole hearings. He asked the parole board to release Sirhan, stating he did not shoot Kennedy.

"Sirhan should have been released many years ago," said Schrade.

The board allowed just one reporter inside the hearing, Associated Press reporter Elliott Spagat.

"During the hearing he was composed, a little fidgety at times," Spagat described Sirhan's demeanor. "He wanted to get his word in."

Like previous parole hearings, Sirhan told officials he didn't remember the assassination. However, Spagat said Sirhan recalled great detail of events before the shootings, when questioned by the parole board, such as being at the firing range earlier in the day, going to downtown L.A. for a Jewish/Pro-Israel rally then heading to the Ambassador Hotel for drinks.

Spagat said Sirhan recalled being too drunk to drive, so he returned to the hotel where he took an interest in a girl, then he said he didn't remember anything after that.

Sirhan told the board he's not guilty and he said the outcome would have been different if he had effective representation at his trial, said Spagat. Sirhan's attorney, William Pepper, told reporters after the hearing that three clinical psychologists, who said Sirhan was a low risk to the community, were overruled by the board.

Pepper said he is seeking a new evidentiary hearing before the 9th Circuit Court of Appeals to put the case back on trial.

The parole board listened to testimony for more than three hours and deliberated for one hour before reaching its decision to deny parole.

"They said he didn't understand the enormity of his crime and he failed to express adequate remorse," said Spagat referring to the board's findings.