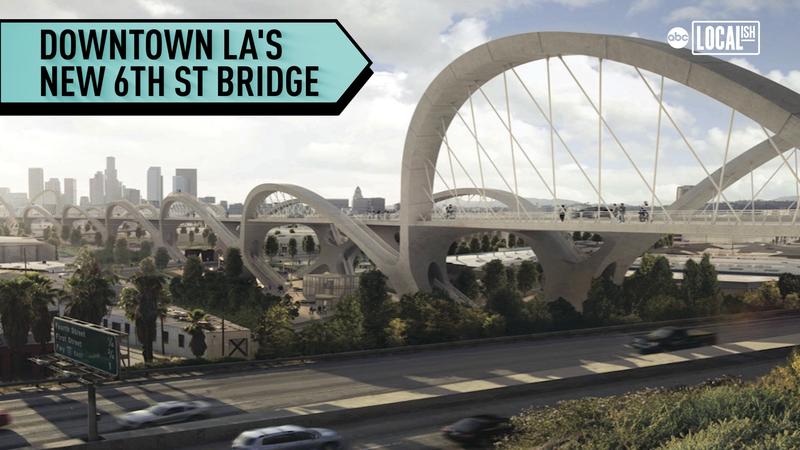 LOS ANGELES -- In 1932 the original Sixth Street Viaduct opened in Los Angeles, connecting Downtown L.A. to Boyle Heights. At the time it was the largest and longest of all the bridges in the city. Unfortunately, they didn't test materials back then, and it was unknown at the time that the materials used to build the bridge would cause a chemical reaction called an Alkali Silica Reaction, which is also known as a concrete cancer. In 1952 the bridge began to crack, and after multiple failed attempts to repair it over the years, it ultimately was deemed seismically deficient, and the decision was made to demolish it.

Fast forward to 2012 when the City of Los Angeles decided to not only replace the bridge with a new, better viaduct, but to hold an international design competition for the right to design it.

"I thought, what an opportunity we have here," said City Engineer Gary Lee Moore. "The community has been incredible. They came with us through the journey. They went to all the community meetings with us. It was, and has been, such a wonderful, wonderful experience working with the two communities."

Ultimately, the winner was design firm HNTB with its design dubbed The Ribbon of Light. It features ten pairs of arches ranging in size from 30 to 60-feet. The bridge will not only have four lanes of traffic like before, but it will have a bicycle lane on each side, 14-foot-wide sidewalks, and five sets of stairs that let pedestrians exit the bridge at different locations. One of the main highlights of the bridge will be the 3 level helical ramp that pedestrians will be able to walk or bike down from the deck level of the bridge.

"Nothing is like this. We've never seen anything like this. Im very excited to see all this come together," said Moore.

The bridge will also be a special place at night for Angelinos, as the arches will be lit up with color changing LED lights for different events and celebrations.

"I hope there's a lot of Dodger blue shining, a lot of Laker purple and gold, Kings black and white. Were just really excited to celebrate this with the community during the day and the night," said Moore.

Once the Sixth Street Viaduct is completed, the Bureau of Engineering will begin construction on the new 12-acre Sixth Street Parc (Parks, Arts, River and Connectivity Improvements), which will rest at the base of the bridge. It will feature soccer fields, basketball courts, a dog park, adult fitness areas, children's playgrounds and splash pads, a skate park, picnic and garden areas, and an amphitheater.

"I'm excited about the acoustics," Moore told Localish. "I think its going to be one of those special spots in Los Angeles, and I look forward to seeing performances here."

Of course, any large construction in Los Angeles will have to account for the seismic activity in the area, and the new bridge is no exception. Each column will be equipped with triple friction pendulum bearings, which will allow the entire bridge to move 30 inches in either direction during a seismic event.

Moore emphasized, If there is a seismic event, if there is an earthquake, this is where you want to be. This is going to be one of the safest spots anywhere.

The bridge deck construction is scheduled to be completed in summer 2022.