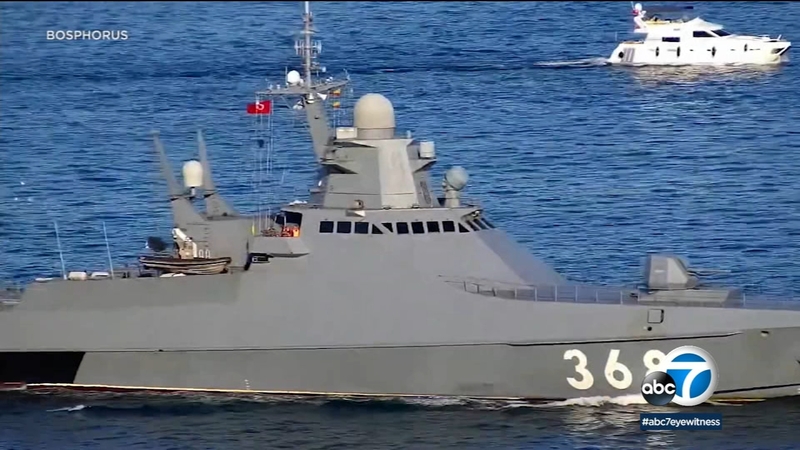 Russian warship that attacked Snake Island has been destroyed

SNAKE ISLAND, Ukraine (KABC) -- A Russian warship that attacked Snake Island in a video that went viral for its portrayal of Ukrainian defiance has been destroyed, according to new reports.

What happened next made headlines around the world.

"I suggest you surrender your weapons and capitulate," the Russian warship captain said.

The Ukrainians manning the island had no plans to surrender.

Ukrainian officials say a Russian strike has hit a children's hospital and maternity facility in the besieged southeastern port city of Mariupol.

The Times of London reports that the warship Vasily Bykov was hit during a firefight after the Ukrainians used a smaller vessel to lure the Russian ship closer to shore where a hidden missile battery could open fire.

New video shows the Ukrainian missile battery unloading on the Russian warship. After the missiles stopped firing, you can see a small light in the video. That's the Vasily Bykov on fire, and the gunner is quick to celebrate his hit.

"We f***ing hit them," one man says. A second man rejoices by using a familiar phrase: "Russian warship, go f*** yourself."

This is video of the Ukrainians firing on the ship in the dead of night as well as the smoking vessel at dawn, shared by Ukraine's navy, which says the Vasily Bykov was destroyed.
EMBED More News Videos

Just days after Russia invaded Ukraine, the Russian warship ordered Ukrainian soldiers manning a black sea outpost on Ukraine's Snake Island to surrender. What happened next made headlines around the world.