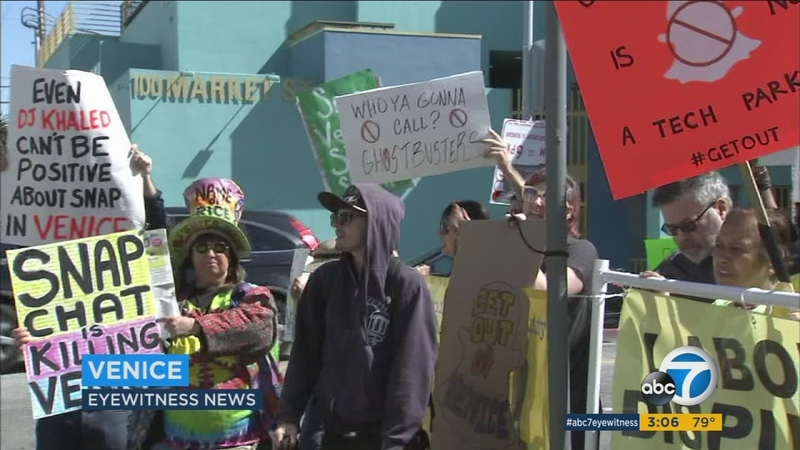 The company had priced its initial public offering of 200 million shares at $17 each on Wednesday. That was above the expected range of $14 to $16.

However, the protests took some of the gloss off the company's achievement.

Venice residents and business owners are upset with Snap's growth in the community, complaining that the company behind Snapchat has gobbled up once vibrant shopping and restaurant locations and converted them into boring office space.

In response to the protest, Snap released the following statement:

"We've been very grateful to be a part of this creative community for over the last four years and we've worked closely with local schools and nonprofits to be a good neighbor. No one could have anticipated how quickly we've grown, and we have already begun focusing our future growth outside of Venice."

Snap's IPO was one of the most anticipated for a technology company since Twitter's in 2013. That, in turn, had created the biggest stir since Facebook made its debut on Wall Street in 2012. Twitter is now valued at $11 billion, while Facebook is $395 billion. Snap's pricing valued the company at $24 billion.

Snapchat is best known for disappearing messages. It's popular with young people, but growth has slowed in recent months. That has investors wondering whether the company will end up more like Twitter, with its troubles attracting users and declining stock price, or Facebook, with soaring user numbers and stock price.