LADWP under fire for bulldozing habitat of rare, protected plant in Pacific Palisades 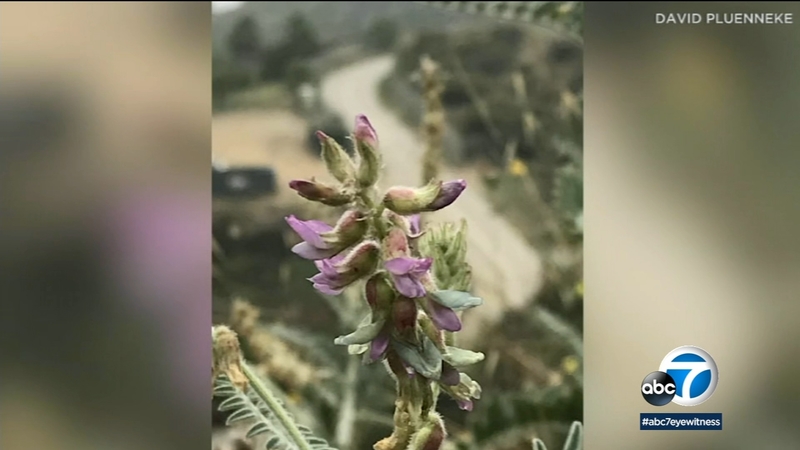 LADWP under fire for bulldozing protected plant in Pacific Palisades

LOS ANGELES (KABC) -- Conservationists are raising a stink over an endangered plant habitat that the Los Angeles Department of Water and Power has bulldozed.

Patches of the Braunton milk vetch with its stalk of purple blossoms exist nowhere in the world as it does in the Santa Monica Mountains.

The Los Angeles utility says that clearing areas above the Pacific Palisades known for the plants was for fire safety. Crews need to replace wood power poles with metal ones.

Conservation advocates have no quarrel with the fire mitigation measures, but question the way LADWP proceeded.

"My main reaction was sadness. And frustration at the fact that this could have been done in a much more gentle way," says Nick Jensen with the California Native Plant Society.

Now the utility says it has halted construction and is working with biologists and other experts to conduct an investigation of the site.

Jensen says that LADWP was formally notified about the milk vetch site near the Split Rock trail and that the utility company responded that its environmental unit would be alerted.

Jensen also says that there is a statewide database of endangered species habitats that LADWP is supposed to consult.

Conservationists say there are measures that could have mitigated damage. They suggest that volunteers could have collected milk vetch seeds for later replanting and invasive species could be removed so that the heavy equipment would not bring in unwanted weeds.

"L.A. is a wildflower and plant-loving city. Each one of these pieces of our biodiversity, of our heritage is something that I think we deserve the greatest effort to preserve."