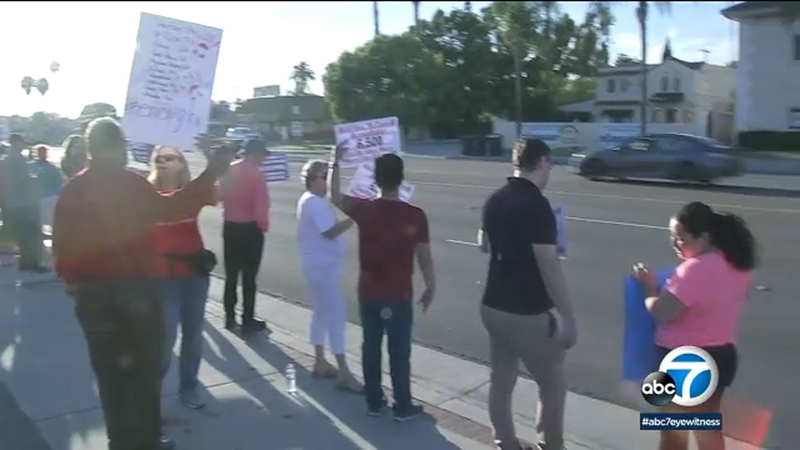 In Orange, nearly 50 people who gathered formed a single chain along the south side of Chapman Avenue toward the 57 Freeway. Protesters demanded Sen. Mitch McConnell bring gun violence prevention bills to a vote as they painted their hands red. McConnell has blocked bipartisan gun bills, which have passed the House of Representatives.

"It happened to my family, the biggest mass shooting in Orange County still to this day, it's Salon Meritage," protestor Bethany Webb said. "My sister died. My mom was shot; she was the sole survivor."

At a prayer service in Newbury Park, congregants also understood the pain. The mass shooting at Thousand Oaks' Borderline Bar and Grill last year is located near Newbury Park.

The gathering, which was already scheduled, took on a new focus after the shootings in Gilroy, El Paso and Dayton.

"For us personally, it's something that we're unfortunately well acquainted with as a community, but one of the beautiful things is seeing people come together, respond with prayer, respond with love and continue to support one another even out of the most difficult circumstances," said Matt Elam of Monte Vista Presbyterian Church.

"The ability for people across this country to have ready access to military grade weaponry that has the ability to afflict mass casualties is far too great," Moore said.

"I understand our origins and upbringing as to gun rights and access to weapons, but we have to look at what that is costing us," he added.